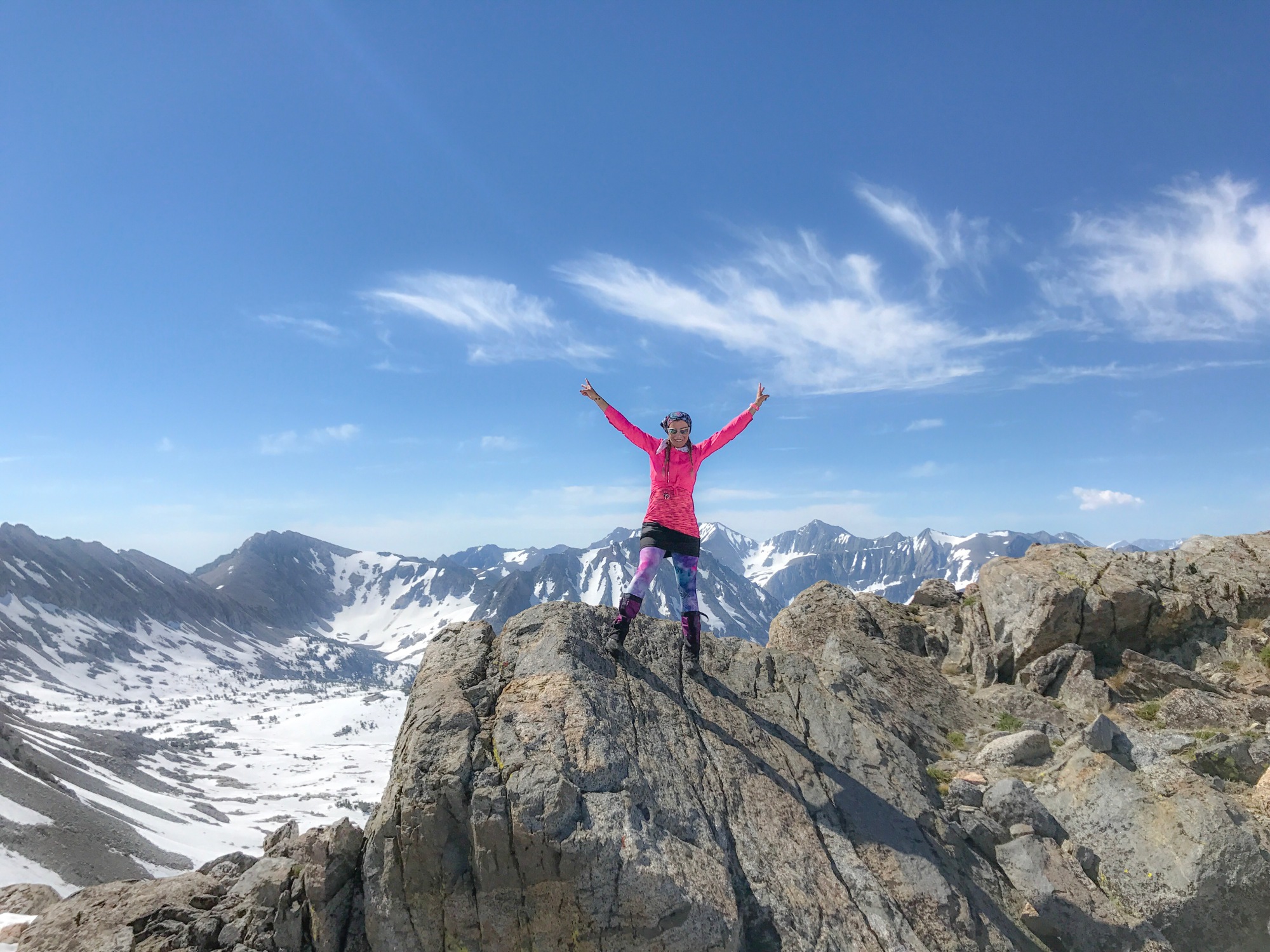 As you may have read, the last stretch kind of scared me a bit and I decided to go home to make some decisions before continuing on… Actually, at first, I was going to give up. You know… Throw in the towel. Raise up the white flag… Quit.

However, while sitting on the plane back home, I was already missing the trail. I don’t know what I was exactly trying to accomplish by going home. I wanted the snow to melt, but quickly realized, that wasn’t going to happen in time for me to finish the trail this year. After a few days of being home, I started to get really home sick for the home that my heart longs for… the wonderful outdoors. So, after 10 days at home, I spent 13 hours traveling by plane, bus and hitch hiking (from Bishop to Independence, in a Sherif’s Car! – thank you to the wonderful Sherif who gave us a ride!), and I was back home, to the PCT.

PS. I highly recommend staying at the hostel in bishop, but they were booked when I came through! I loved the colors!

I ended up running into a friend that I had met during the last stretch, who has also taken a week off, so we decided to conquer the next few days together. We stayed at a hostel in independence the night prior. During my time at home, Southern California, was experiencing a record heat wave, that was drastically melting the snow in the mountains.

Unfortunately, this massive snow melt, resulted in the Sherif’s department closing the majority of Onion Valley Road (the very steep road to the Kearsarge Pass trail head, leading back to the PCT). So, we had to road walk. It was in the high 80s at the start of our road walk at 0820 am.

My pack was heavy, as it always is on day one of the resupply, my body was overheating from the sun and black paved road, and my legs were aching from the steep walk up the road. After 2 or so miles, I do believe my prayers were answered. I heard what sounded like a truck, but I was sure I was hallucinating at this point. Well, it sure as heck was a truck. I eagerly put my thumb out, jumping up and down. The wonderful man who had work to do on the road, let us jump in the back and drove us the remaining 5 or so miles.

What a truly awesome gentleman, and lifesaver. He had two gorgeous huskies, who I quickly made friends with.

The trail up to Kearsarge was snow free for the first couple miles, which was nice. Although the ascent was very steep, I was able to go more quickly without the snow. It wasn’t long before the snow covered the trail again.

It was a long journey, but I felt as if the trek up Kearsarge was a lot less frightening than it was coming down. Possibly because I didn’t take the actual trail down… actually, after being on the real trail, I realized how far off I was from the trail when coming down. Geez!

On the other side of Kearsarge, back to the PCT, the snow had decreased drastically and I completed several switchbacks which were not visible 10 days prior. 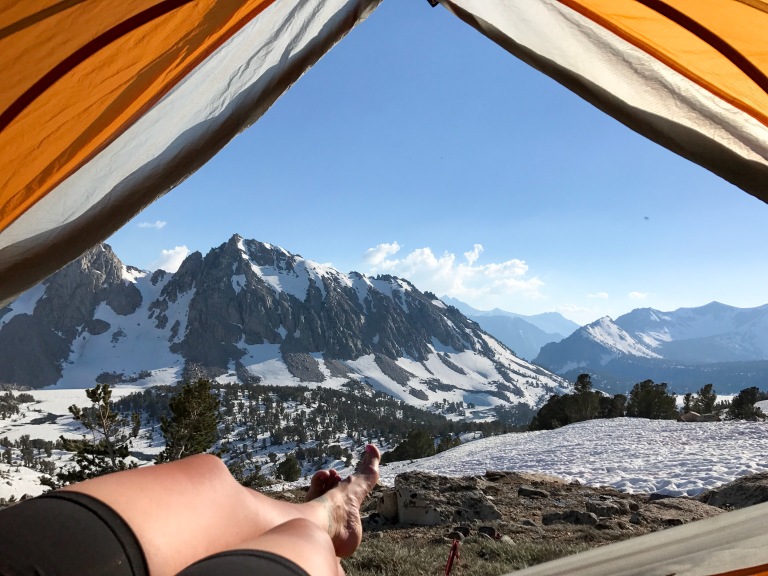 We were physically drained from the incline, snow travel, post holing and heavy packs, so we decided to call it a day and hopefully, get an early start to get miles in on the hard snow the day following. The view was quite stunning at the camp site, per usual!

It was a long day of route finding, snow travel and climbing. I decided that I really really didn’t like mountain passes. I got lost twice on my way up to Glen Pass. My new trail friend had continued on the pass without me, which was totally fine, as I told him not to wait on me. 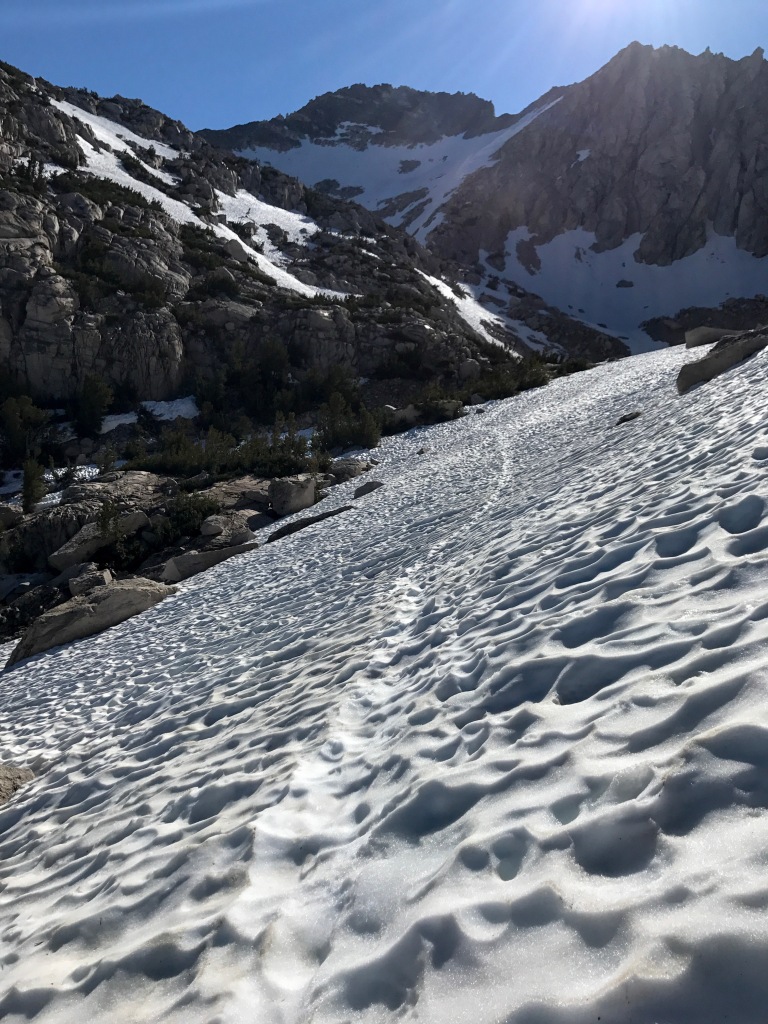 I had just taken off my pack to eat a quick snack, drink some water and rest before my journey over the pass began, when Arvid, Lydia, Ladybug and Rhino walked by. I asked them if they saw my friend, if they could let him know not to wait on me. Arvid said, “Sorry no, I can’t do that”. He further explained that he didn’t think it was a good idea that I do the pass alone. He told me I was going with them. 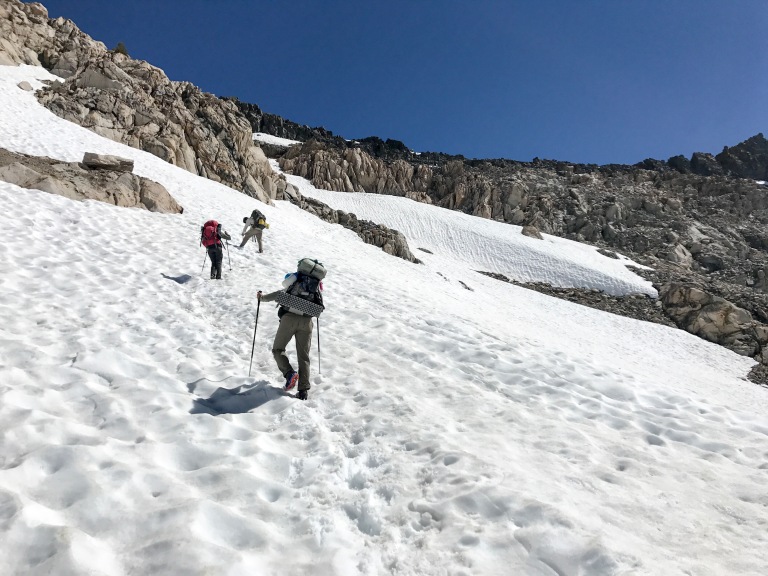 Arvid stayed behind me on the way up Glen Pass and was very patient with me. He said if I needed a break, to stop, and to take my time. 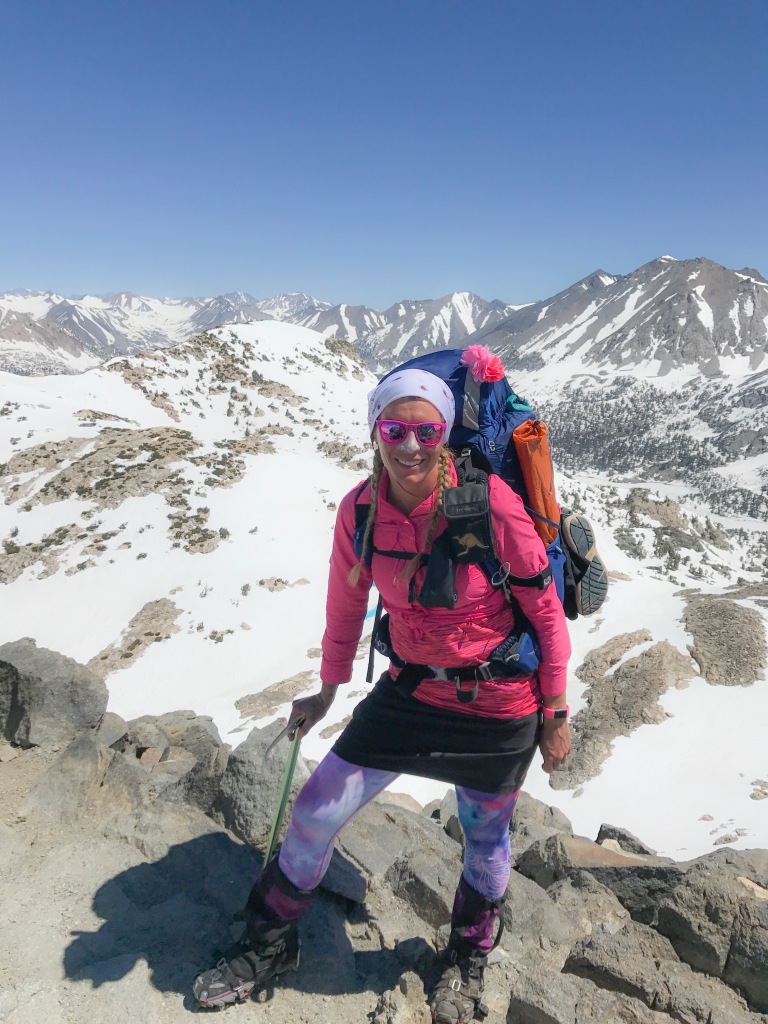 The view from the top was gorgeous, possibly making it worth the fear that it induced upon me. 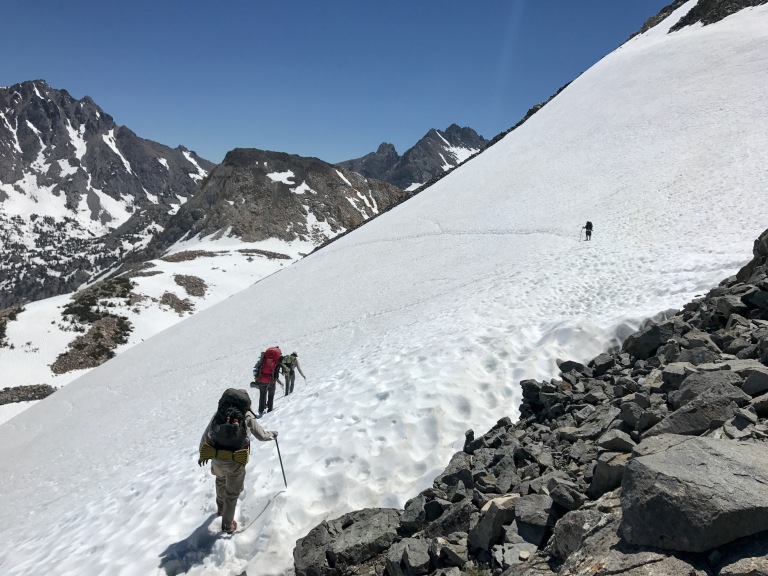 Glen Pass wasn’t too terrible on the way up, but I tell you what, the way down was so terrifying.  I’m pretty sure it took me a couple hours to make it down the steep steep steep pass. Ladybug, saw I was struggling and frightened to get down the pass, so she came back up and coached me/encouraged me down.

That group is really an awesome group. They are really really good people.

I don’t think I’ll ever forget the kindness and compassion they showed for me that day. These are the same individuals who later gave me my trail name. I suppose you’ll have to stay tuned to find out what my trail name is!

So, I survived Glen Pass, thankfully! Shortly after Glen Pass, we came to a lake outlet crossing, which required getting a bit wet to cross. When I say wet, at one point, I was waste deep.

I thought this would be a piece of cake. I followed those in the group who crossed before me, but as soon as I stepped in the lake, the bitter cold must have shocked me so much that I couldn’t really think straight. Telling my legs to move was such a struggle. I couldn’t find the rock to step on to get out of the lake, as I was in a bit of a state of shock with the cold and deep mess of the crossing, so my new friends had to come to my rescue again. I came out with a severely decreased core temperature, bloody leg and a hurt ego, but thankfully nothing more serious. 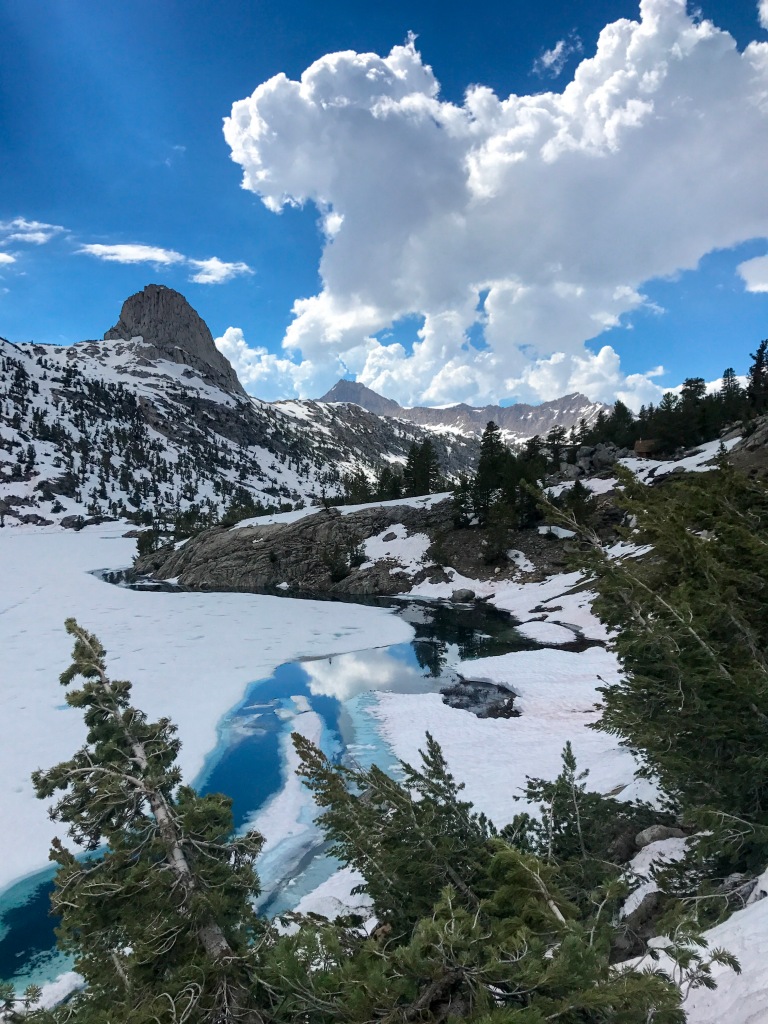 The remainder of the day consisted of a lot more snow travel, but beautiful creations of God, nonetheless. 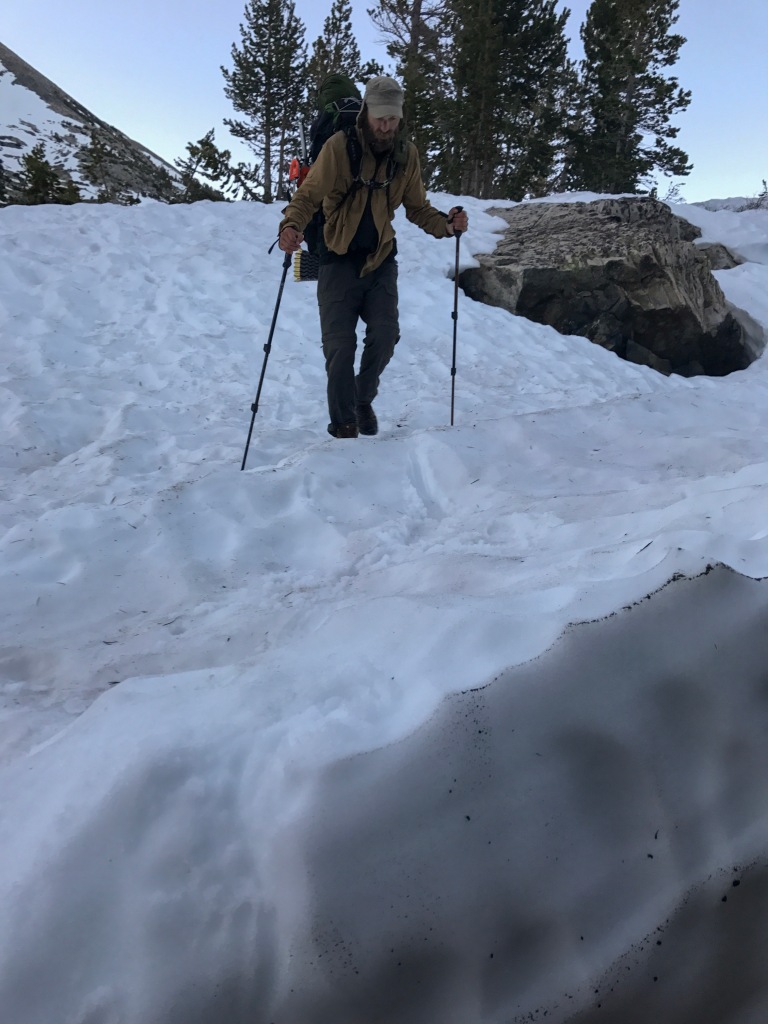 It felt as if there were a million creek crossings. While visiting in Bishop, I had heard horrible stories about Baxter Creek, so I was a bit anxious about crossing it. We arrived at Baxter Creek at 730 and shortly after, about 20 more people showed up. It was really awesome. Two of the guys (Radio and Shake Down) took a log and put it across one of the crossings, making it easier to cross. 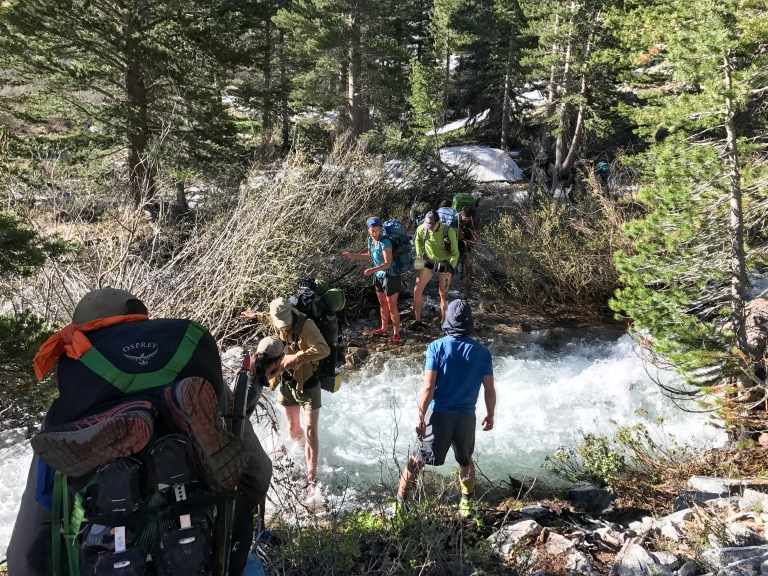 We all crossed by holding onto the branches of bushes in the water and walking across the log. There was so much team work. It was really a relief to get that crossing over with.

After crossing a pretty spectacular, and a bit shaky, suspension bridge, I crossed the 800 mile marker! Whoohoo! 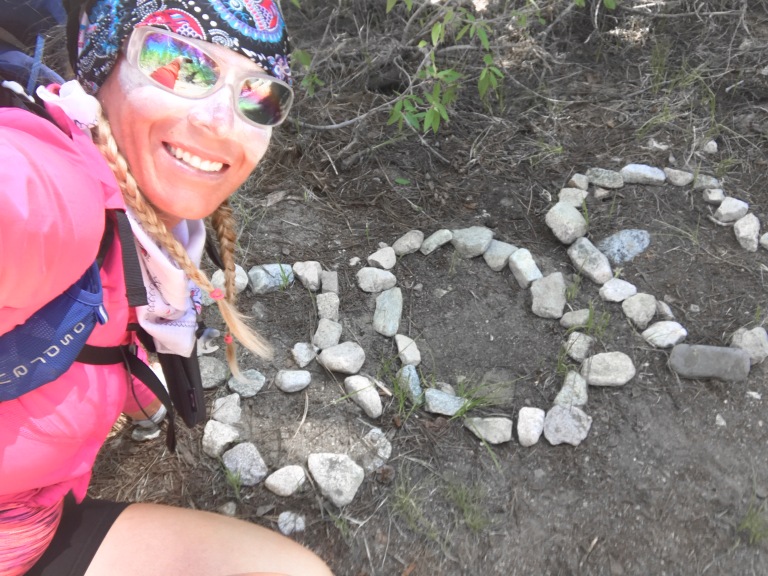 Another creek crossing, White Creek (I believe), was too strong for us to cross at the trail, so we had to walk/boulder/climb up stream to the top of this pass to cross on a snow bridge.

This escapade took at least a couple hours. It was so physically exhausting. 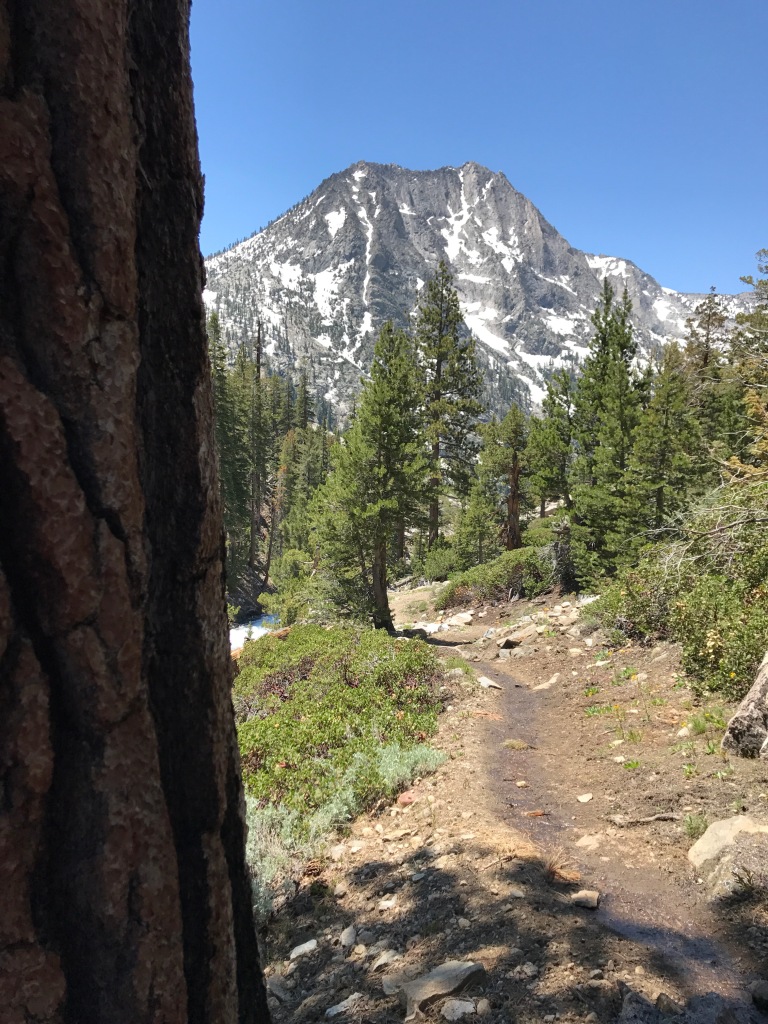 We dropped below 9,000 feet! You know what that means?! We could see the trial because there wasn’t any snow! It was glorious! The snow started to come back on the way up to Pinchot Pass, but it was nice while it lasted. The trail that wasn’t covered by snow, was however, flooded with water.

I have been really slow. I’m not sure if it’s the climbing, the snow, my pack of what, but I am pretty much the slowest person in this wave of people. I really felt like I was holding the two back that I have been hiking with. I told them I wouldn’t mind if they went ahead of me. I much rather enjoy hiking alone, with no time schedule and not racing to catch up.

I had also been really forgetful throughout the last several days. I managed to lose my hat (hence the sunburn and white face), my gaiters and my water shoes. What a hot mess I was!

Another early morning! We started before the sun was up, which is always challenging when you are walking in suncups and trying to route find.

Pinchot Pass was really scary on the way up for me. It felt like a super long, steep pass. The photographs don’t portray the steepness that my eyes saw before me.

The last mile or so, of each one of these passes, has been really steep. Some longer than others. Some transversing across the mountain. Some straight up. No matter the how steep, and no matter how long the pass, it’s so terrifying for me. I’ve tried controlling my breathing. My fear of heights takes over and it takes everything inside of me to not hyperventilate while climbing. Upon reaching the top of Pinchot Pass, I was hyperventilating and tears swelled up in my eyes. Every night before the Pass, I pray that God will take care of me, help me make good decisions and get me over the pass safely. 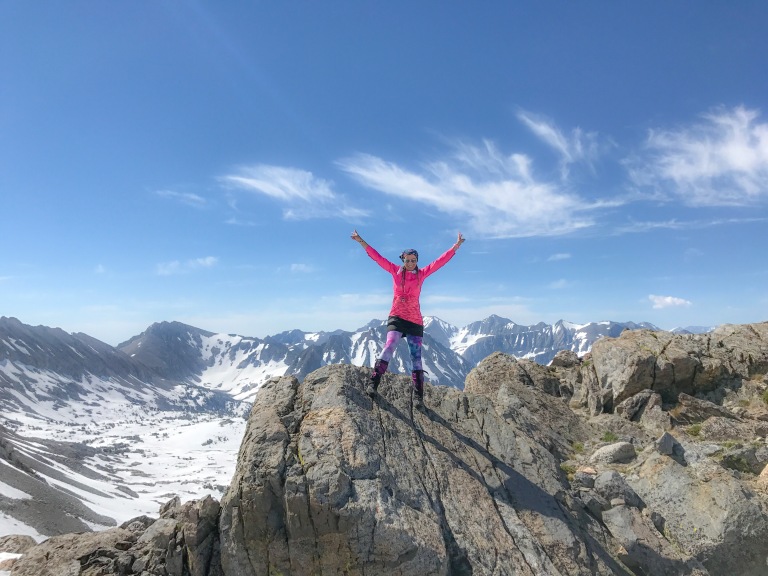 Every time I reach the top of the pass, I am so thankful to be alive. The fear before and during the climb, takes so much out of me. It drains me. It’s almost like the fear is what keeps me going and once I am safely over the pass, I am ready to collapse and am finally able to rest. However, I was not able to do that. So, I just had to keep walking, despite my exhaustion.

Coming down from Pinchot Pass, wasn’t as scary as going up. One side always seems a bit scarier. This was not the last of the passes; in fact, I hadn’t even crossed half of the passes yet to come. Will my fear of heights subside any? Read my next blog to find out!