Ranger and I decided to part ways, as he was wanting to do 30-40 mile days to get to the within range of the eclipse totality. I wasn’t confident that I could get those high mileage days in, not to mention, the introvert in me, was ready for my alone time again. We both have adventuresome souls, so I am sure our paths will cross again.

I left Burney Mountain Guest Ranch around 830 am. It was already scorching hot by that time, but only to get worse as the day went on. The trek into Burney Falls State Park was pretty exposed, but boy what a treat Burney Falls was!

I had not seen another hiker all day. There were a lot of tourists in the park and because the waterfall is so accessible to anyone who was capable of walking stairs, not everyone visiting the falls were outdoorsy people, so I doubt they would even know much about the Pacific Crest Trail, leading to the majority of people probably thinking I was homeless; I felt a bit out of place. I picked up my resupply box at the General store, got a soda and a soft serve ice cream. 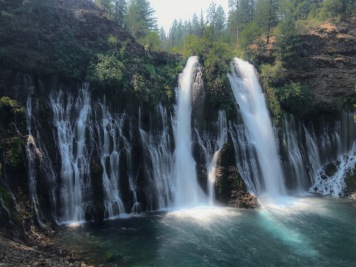 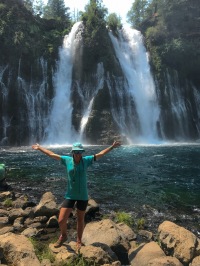 I then made my way down to the bottom of the Falls and sat with Wiz Kid for a bit before continuing on. Burney Falls is a series of waterfalls that fall into a beautiful teal green pool.

I left Burney Falls around 1pm and the temperature reached over 100 degrees at that point. My mind was telling my body to go faster, but my body wasn’t able to. When I reached the bridge at Rock Creek, I read the comments on the Guthooks app and discovered a swimming hole about .04 miles from the bridge at Rock Creek. I ran into my friend Ten Gallon and convinced him to venture down to the swimming hole and take a swim with me. 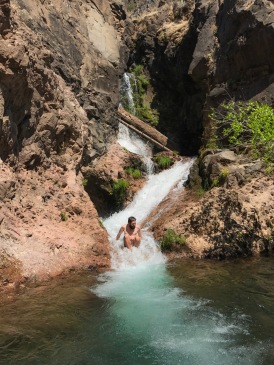 It was quite a steep decent, but man was it worth it. This was by far my favorite place to swim to that point, on the PCT. A large cascading waterfall was pouring into the teal green pool, where we jumped in. It was so perfect. Ten Gallon even climbed up the waterfall a bit. It was exactly what was needed on such a hot hot day. 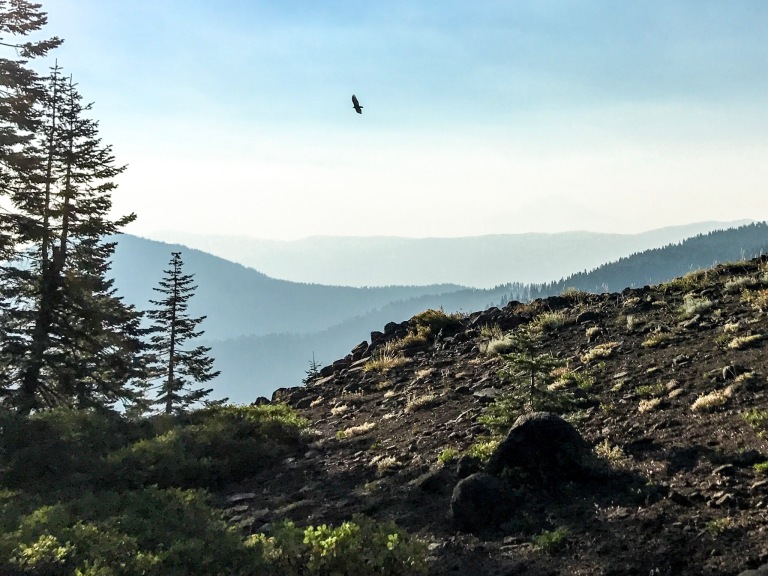 I continued on and it wasn’t long before my body had forgotten the coolness of the cold water and was over heating. I drank several liters of water with Gatorade powder and several more liters of water on top of that. I was drenched in sweat. As the day went on, it did cool off some, but not much.

I arrived at camp, shortly after 9pm, to find Ten Gallon and So Full camped at the same location. It’s always exciting to run into friends you’ve met along the trail.

My legs were throbbing, my body was exhausted and my mind was ready to be recharged. Despite the heat, I was able to fall fast asleep.

Log obstacles suck, but what had become more of an obstacle lately, were lizards. They love running across the trail, and then changing their mind, and continuing on the trail, frantically trying to find a safe place so I wouldn’t do whatever horrible thing, they thought I was going to do to them. I would almost trip myself, trying to avoid squishing them with my shoe, or stabbing them with my trekking pole. 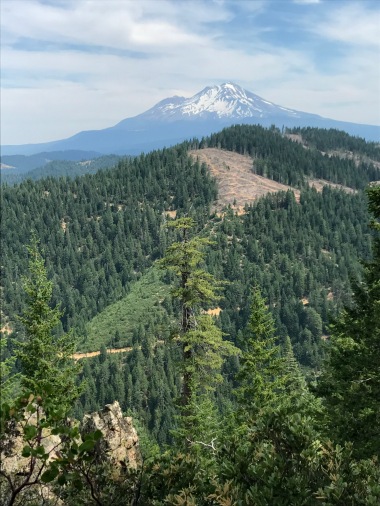 The smoke must have cleared, because I was able to clearly see Mt. Shasta for the first time. Boy was she beautiful and quite the sight for sore eyes!

I feel like urine and sweat are like gold to the animals out here because of the salt in them. Too bad animals don’t have money… I could start charging for my urine. First my trekking poles were eaten by the rats and as I was sitting down for a break after peeing, I looked over to where I peed and a squirrel was drinking my urine. Gross.

So I sat my pack down to walk to the water source, which took about 10 minutes. I came back to have lunch with Ten Gallon and apparently, prior to getting water, I somehow managed to hit my SOS button on my InReach GPS device. I started getting all these texts from my sister and my mother. After speaking with my sister, InReach had contacted her and my mother informing them that they were sending out search and rescue. After making a quick phone call to Garmin InReach, I immediately called my mother. She was hysterical, as I suppose any mother would be in this situation. I didn’t realize the severity of the situation and what I had put my family through, if only for 10 minutes.

Although a terrible thing that happened by accident, it was nice to find out that the SOS works and Garmin InReach was extremely quick to respond and very understanding when I said it was an accident. I had the device locked, but must have hit the SOS from the app on my phone some how. Again, although a terrible situation, I felt so loved, as weird as that sounds. I am so grateful to have such an amazing mother, step father (who was rushing home from work when my mom called him) and sister. I feel like the luckiest girl in the world. To my family, I know I have apologized quite a few times, but I am so terribly sorry for the amount of stress this put you through. Thank you for loving me as much as you do. 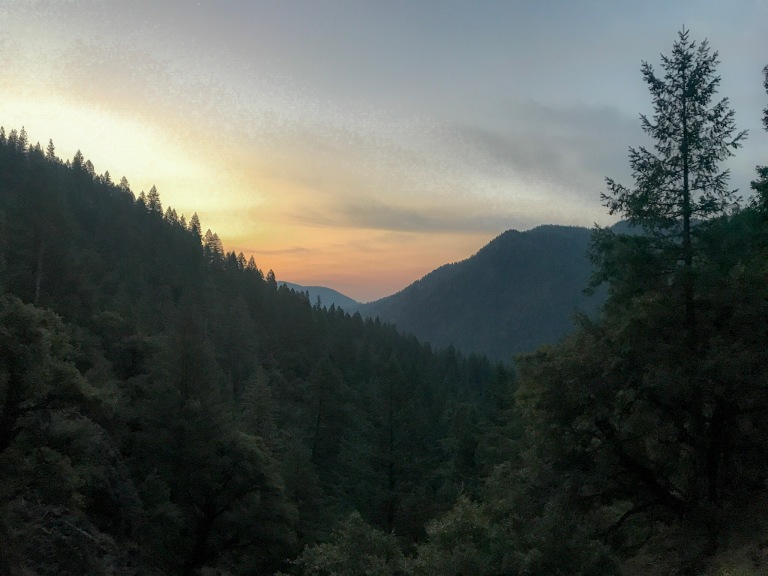 I made it to Ash Camp and McCloud River and ran into Sherlock and his group (aka trail kids). Sherlock’s dad was visiting him and he brought lots of food for them. They were so nice and offered for me to join them. I had been crossing paths with Trail Dad and his trail kids since the Sierra Nevada section. It was such a nice surprise and pleasant treat. I was so thankful.

It wasn’t at hot today, which was a relief. I started hiking at 430 am to try and get the uphill out of the way before my body succumbed to the heat. When I got into Castella and there was nothing but a gas station, a post office, a shower that seemed to be forever away, and most of my friends had either skipped ahead to see the eclipse, or were behind; I soon became really homesick.

I picked up my resupply box and was pleasantly surprised my mother had snuck a few goodies in there. In random boxes, I put a new colored hiking shirt and sunglasses in, and this happened to be one of those boxes, which is always a little exciting. As another hiker and I were sitting there, a guy was walking toward the store, but stopped to talk to us. Him and his wife/girlfriend were so excited that we were hiking the PCT and told us how proud they were.

On their way out of the store, the gentleman gave us a 5th of Fireball and the change from his purchase. What a nice couple!! Thank you!

After getting to the Campground shower and reading that you had to buy tokens over a mile away, I wanted to cry. Instead, I shaved my legs in the sink (and cleaned up after myself). I depressingly made my way back to the gas station. After an old trail friend, cheered me up via text, my friends who had given me my trail name showed up, which definitely cheered me up. Then my other hiker trash friends showed up and I immediately forgot my homesickness. Maybe I wasn’t home sick after all, maybe I was just a little bit lonely. As one of my favorite trail friend always says, as do many others, “the trail provides”, and so does God.