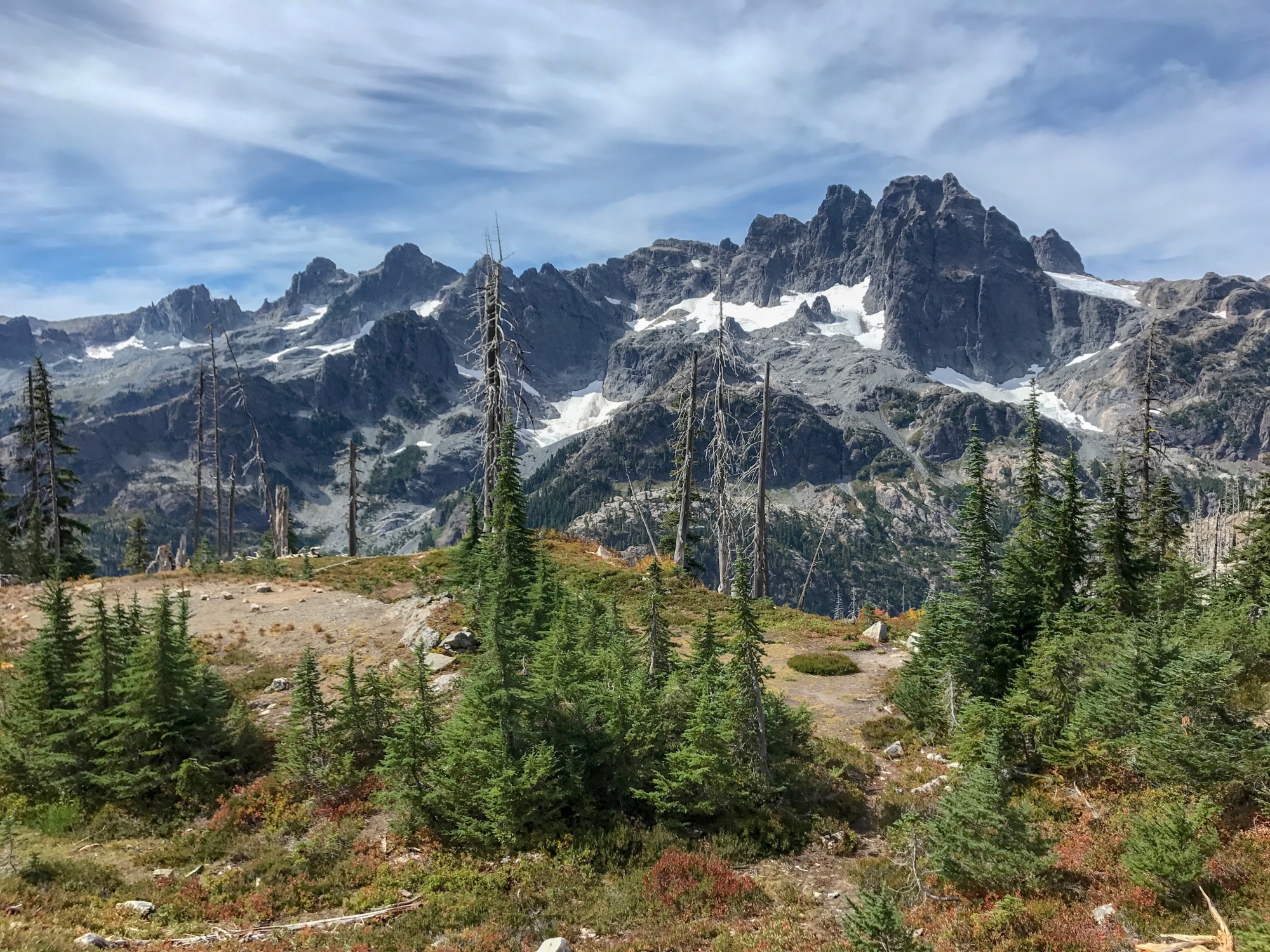 The fire closure at White Pass was unfortunately 99 miles, which left me getting back on the trail at Snoqualmie Pass.

Despite the highway traffic and dozens of other hikers camping close to me, I slept like a baby the night prior. I had been looking forward to this upcoming section, the Alpine Lake Wilderness, for weeks. I had picked out several hikes to lakes that had been on my bucket list for awhile now, that we’re connected to the PCT. I had plenty of time before I was to meet my mom at the border due to the fire closures, so I was planning on spending a couple extra days in this section.

After I was packed up, I headed to the trail a few feet away from where I camped. When I came upon the trial, there was a printed out sign regarding the closures in the Alpine Lake Wilderness because of yet another fire. These closures included all of the side hikes that I had planned to do. I was really pretty bummed. Although I was sad for myself, I was also really sad that wildfires were burning some of the most beautiful areas of Oregon and Washington.

The section of the PCT I started my day with, is a popular day hike and trail run. The part of the trail that most people were going to, is called the Kendall Catwalk.

A little less than 6 miles from leaving the parking lot, the trail becomes narrow along a steep rock face. 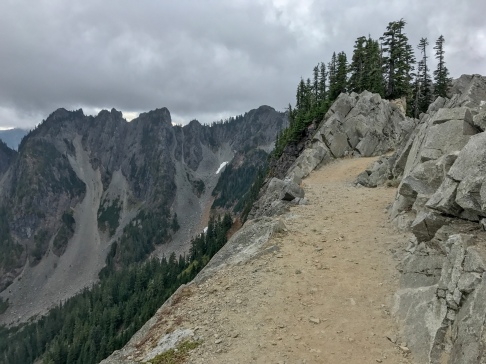 It was a very pretty part of the day. I was so thankful that there were some views, despite the grey clouds and smoke. 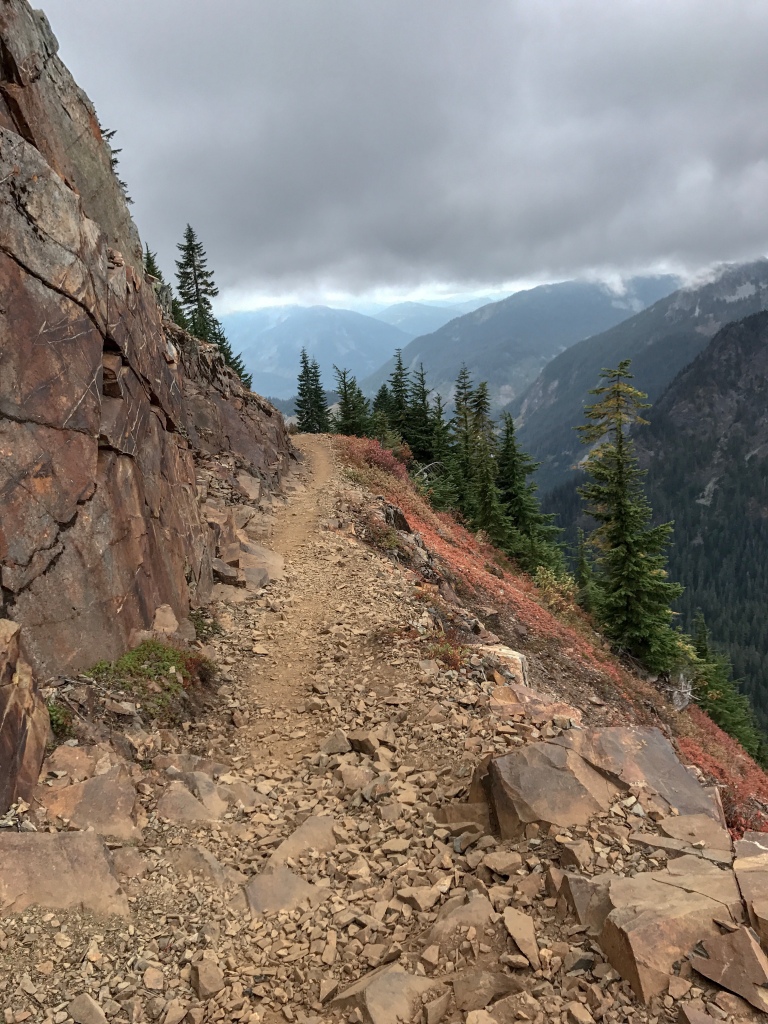 The colors of fall were starting to appear, which were nicely contrasted with the grey skies. 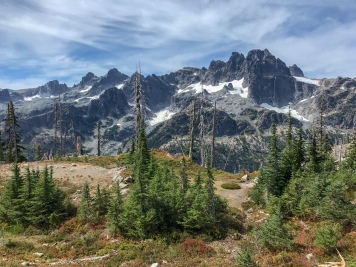 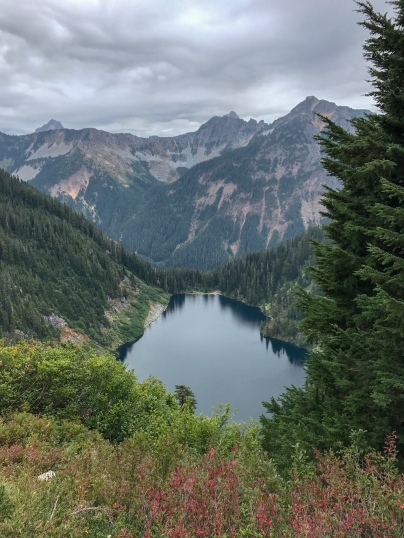 A couple hours into the day, as I was sluggishly making my way up another steep hill, it started to rain. I was told that the rain would make the smoke go away and help put out the fires, so I was actually grateful for the rain. It rained all day though. 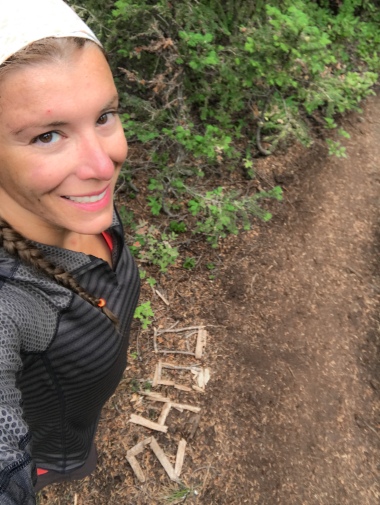 Another mile marker under the hiking belt!

I planned on camping at Spectacle Lake, as I read that it was quite beautiful. When I arrived, I set up my tent and everything was wet. Even my sleeping bag was damp, most likely from the night prior. I made macaroni and cheese for dinner. It rained all night, so unfortunately I stayed within the flapping walls of my tent all night. I made that decision that I wasn’t going to get out of my tent in the morning until the sun was shining and the rain had stopped. I was looking forward to exploring Spectacle Lake… and warming up.

It got rather cold after the sun went down. My down jacket was damp, so I didn’t want to put it on and get my clothes wet. Eventually I was able to warm up in my sleeping bag.

My tent flapping in the wind woke me up around 2 am and kept me up the majority of the morning. I slowly rolled out of bed when the sun was coming up. Most of my stuff was soaked, so I hung around camp, hoping it would dry a bit before continuing on.

The sky had cleared up, which I was very grateful for. Spectacle Lake was gorgeous, as I explored it a bit on my way back to the trial.

My body really didn’t feel like hiking today. My knees were killing me. 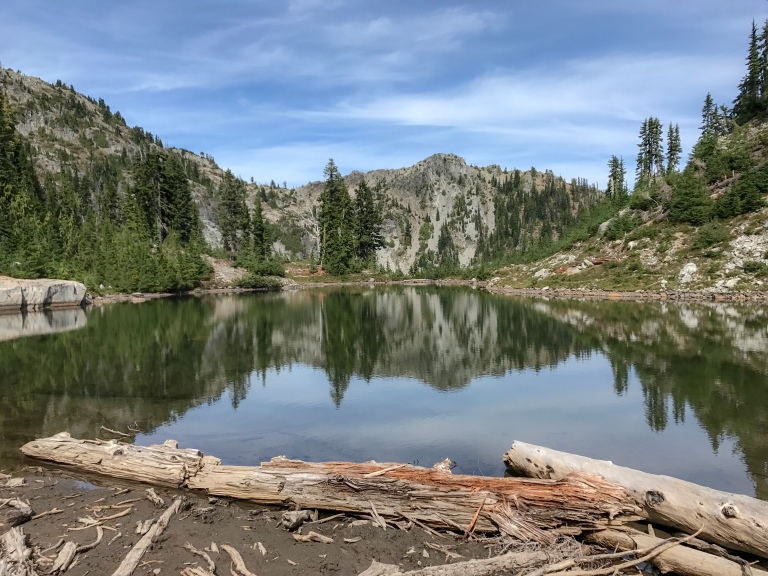 I ran into SoFull and Skip drying out their belongings at a small lake. It was really great to see them.

The climbs were pretty tough today, but the mountain views made them easier to swallow. I had missed Washington and the beauty that it holds. 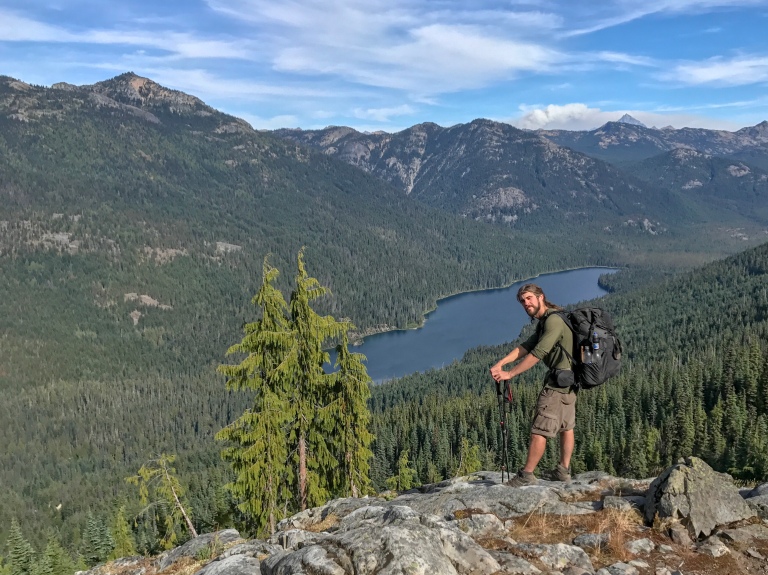 SoFull and I stayed within close proximity of each other the remainder of the day. 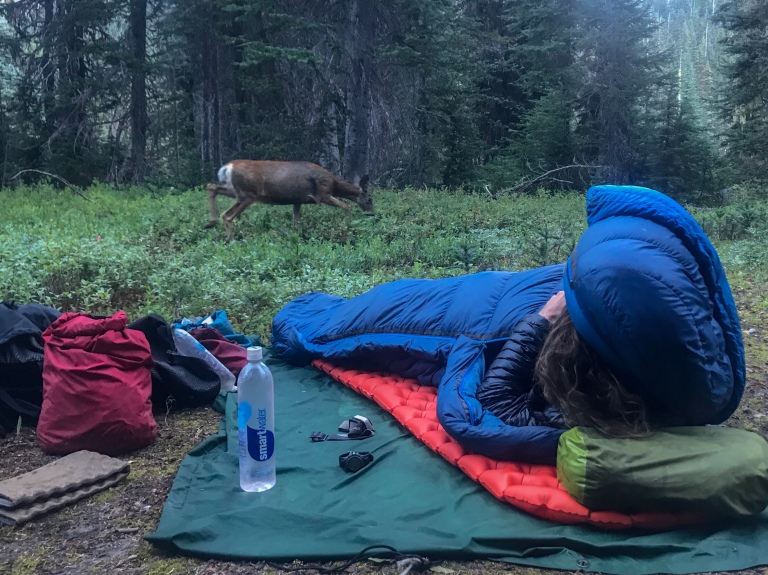 SoFull and I camped together. SoFull of course did his usual cowboy camping routine…. with the curious deer. I of course stayed inside my tent, but without the fly! I only left the fly off my tent when I am camped near others. I had been camping alone a lot, so it was nice to have the fly off my tent. Not to mention, it was nice to have SoFull’s company. Now that there wasn’t a blanket of smoke covering the sky, I could actually see the stars that night.

I was up pretty early, but didn’t want to wake anyone else up, so I tried to rest for a couple more hours. My sleeping bag and tent fly were soaked from the condensation, but I tried not to think about it. I finally got moving around 8 am. 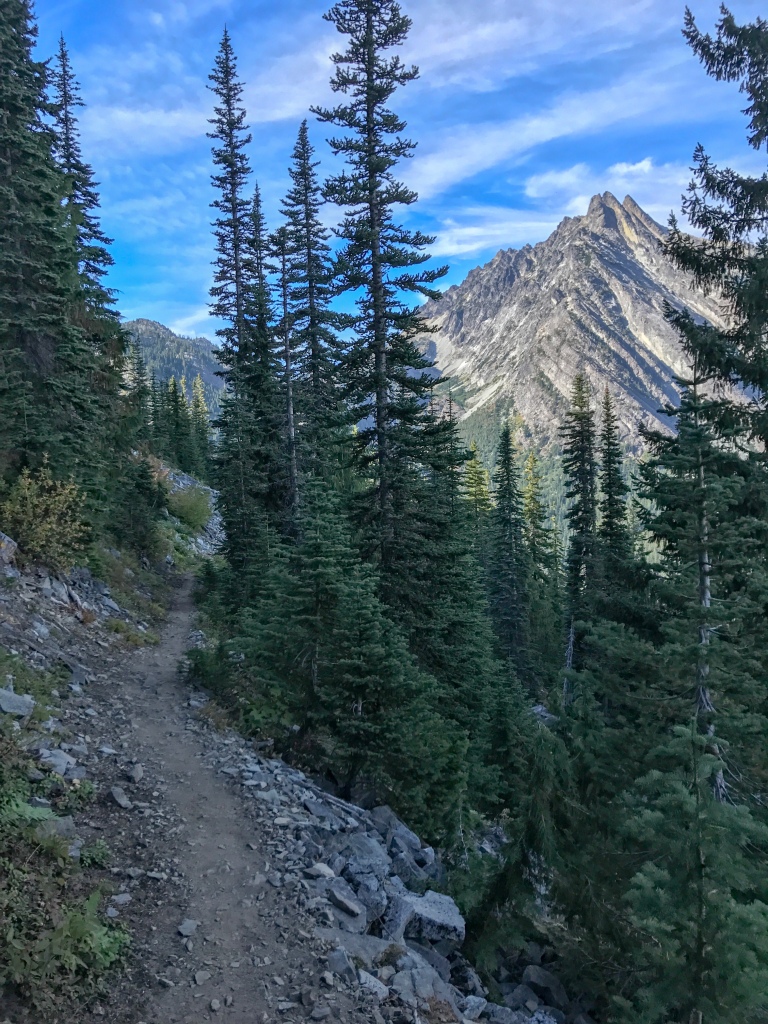 The climb from the night prior, continued until I reached the junction for Peggy’s Pond. I was so excited that it wasn’t closed due to the fire. 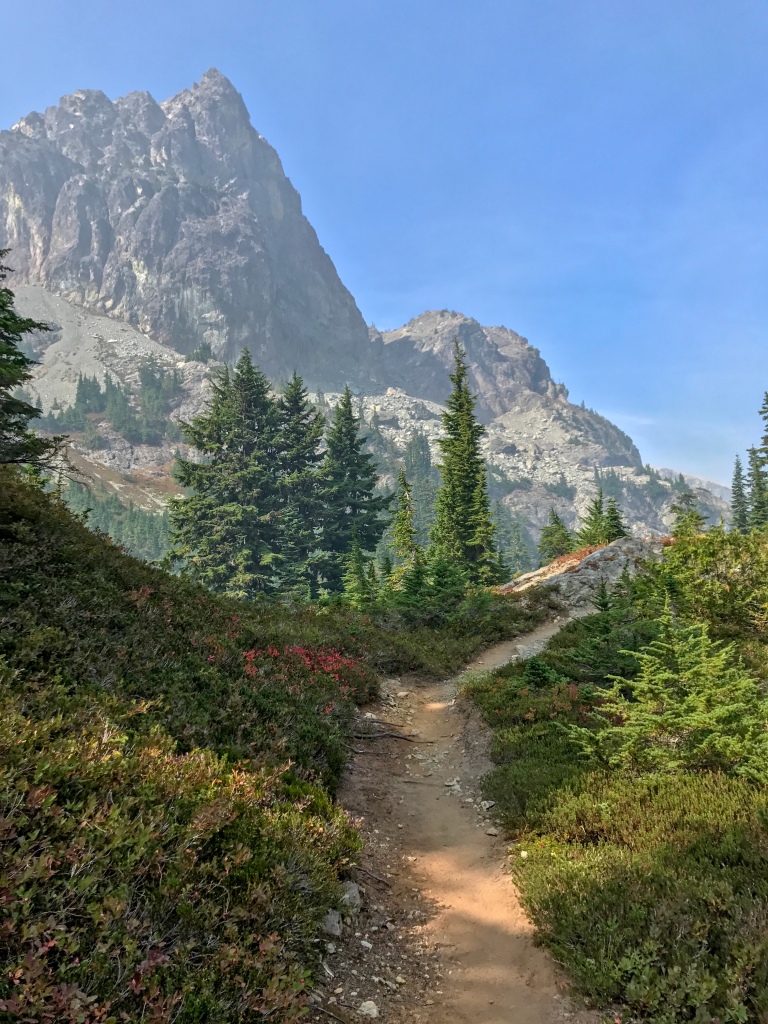 Less than a year ago, my dog, Kadin and I attempted the hike to Peggy’s Pond, but reached snow before coming to the junction. The days were short then, and the hike took longer than I expected, so we had to turn back before reaching the pond. So, this hike had been on my bucket list for awhile now. The trail was a bit of a scramble and parts were not well maintained at all. I got a bit lost and ended up at another pond before reaching Peggy’s Pond. I finally reached the lake and it was well worth the rather difficult terrain to get there.

I spread out all my belongings to dry, took off my shoes, changed into shorts and took a walk around the beautiful turquoise lake. Cathedral Rock stood high behind Peggy’s Pond.

It exceeded my expectations. As I walked back over to my belongings, I noticed the smell of smoke and as I looked beyond Cathedral Rock, I could see the smoke started to fill the sky.

I got a bit worried that the fire would spread and I would not be able to get back to the PCT (irrational thinking, i know), so I hurried to pack up and get back on trail. 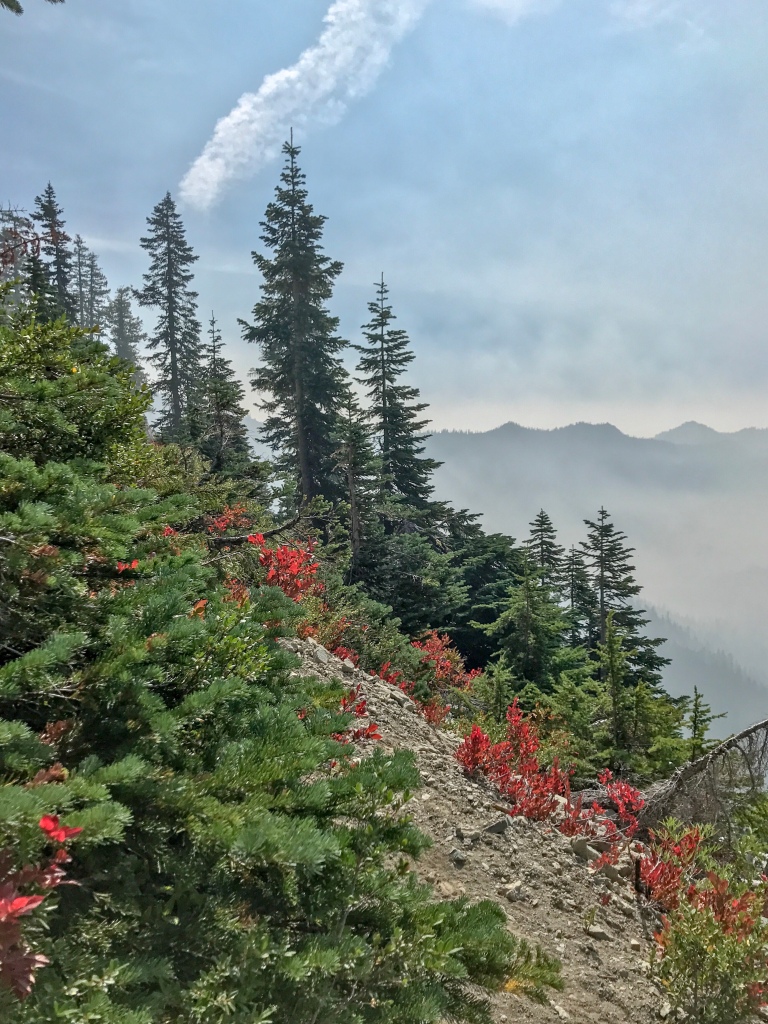 The views that were so clear on my way to Peggy’s Pond were now clouded with smoke. I couldn’t believe how much the smoke could travel in merely an hour and a half. Thankfully, I couldn’t see the fire and it didn’t appear to be anywhere near the PCT, although the smoke was really bothering my eyes, nose and throat. I was a bit bummed that the blue sky and clear views would be gone, but was thankful for the last few days that I did have a view.

I sluggishly made it to a cascading waterfall in which I had to cross. I had read comments that others had crossed on a log downstream. As I was trying to make my way to this log, I slipped on a very slippery rock and there I went again. Half of my body and pack were in the cascading creek, my wrist throbbing in pain because apparently, despite breaking the same wrist a year ago and spraining it a week ago, my mind still insisted on me using it to catch myself from falling. Whoever says that you shouldn’t use your hands to catch your fall, must not have ever fallen in such ways I have in my lifetime. In the moment that my body goes up in the air, the first thing that I am thinking about is not “don’t use your hands to catch yourself”! I can’t even recall what goes through my head during those few seconds while I am mid air, but I am guessing it is more like “oh shit”! I laughed at myself as I pulled myself out of the water and simply crossed where I was, since I was already wet. 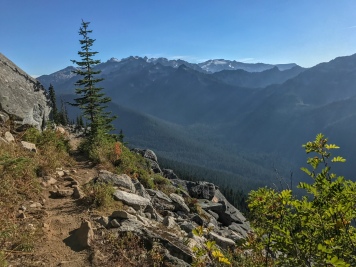 I sat at the beautiful cascading creek and had a few snacks. As I was sitting there, the smoke began to clear! Being able to see the beautiful views of the state I love the most, definitely gave me more motivation. I couldn’t believe how the smoke had cleared completely and I could see mountain range, after mountain range, all the way up and over Piper Pass.

I was quite hungry when approaching Glacier Lake. It was early evening and I knew I wouldn’t be able to get many more miles in, so I decided to enjoy the evening and watch the sunset instead of hiking until dark for once.

It was a bit crowded at the main camping area, so I walked a bit further, and found a perfect one tent campsite with a pretty awesome view of the lake. I loved this spot. I knew no one could fit next to me, or anywhere near me. The snores and squeaky sleeping pads wouldn’t keep me awake and I could get moving as early as I wanted, without fear of waking others up.
I made dinner, ramen with mashed potatoes again, and then walked around the lake to watch the sunset and get a good view of the mountains that I had just walked over, illuminated by what was left of the sun.

As I washed up by the lake, I could see the stars in the sky and the reflection of them on the calm lake water. I continued to star gaze a bit before falling into a deep sleep. 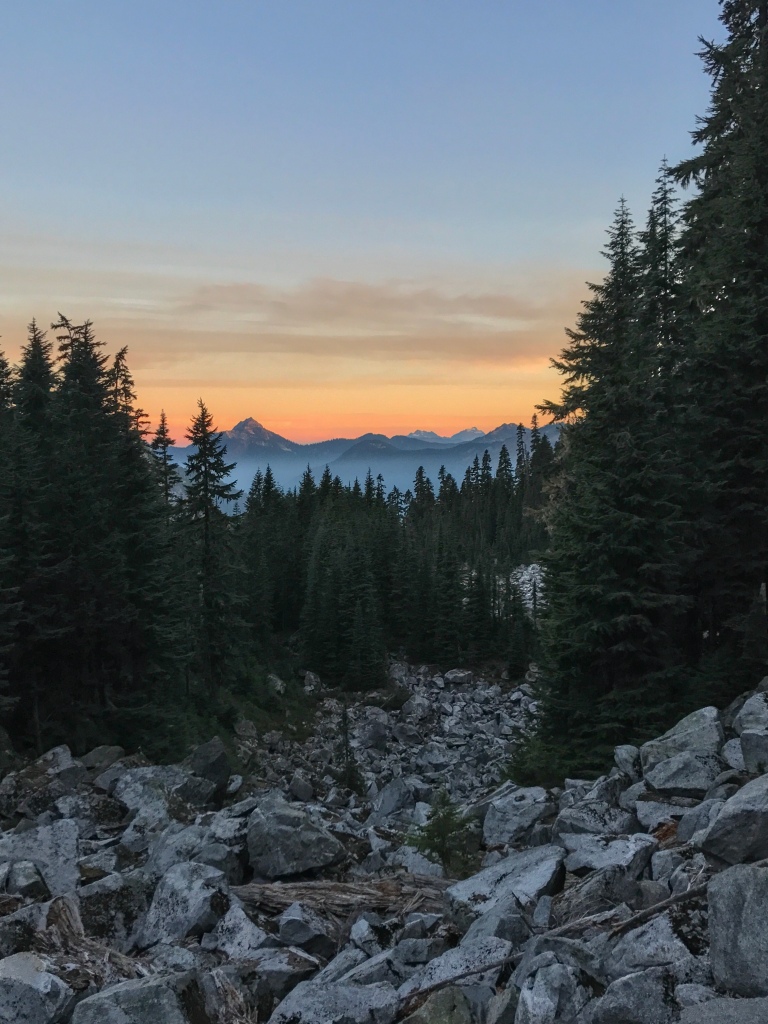 I was able to get a pretty early start. The sunrise was so beautiful. The views were amazing and the climbs were hard on this day.

In fact, the day started with a very steep climb. 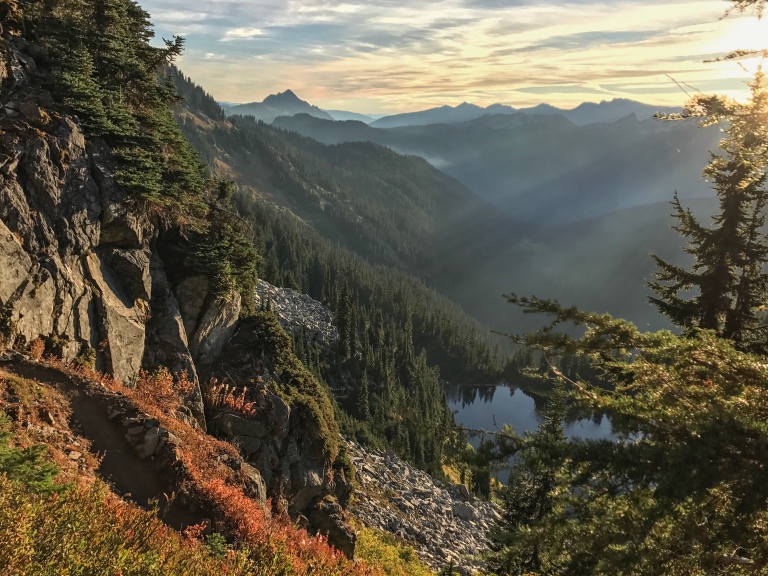 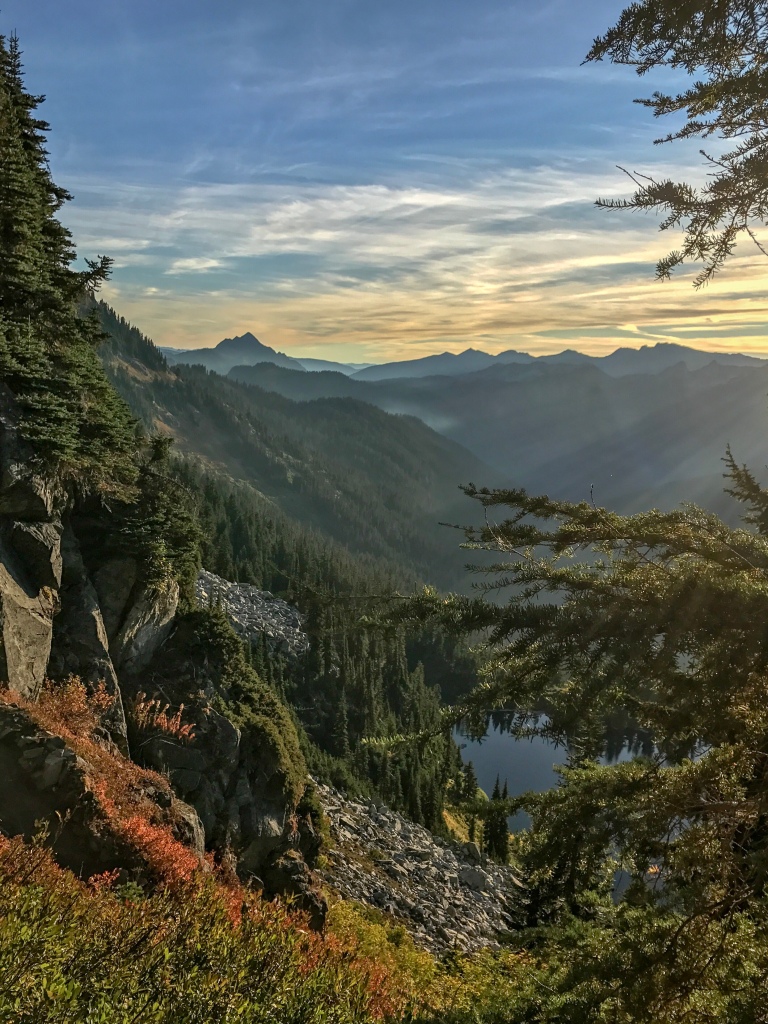 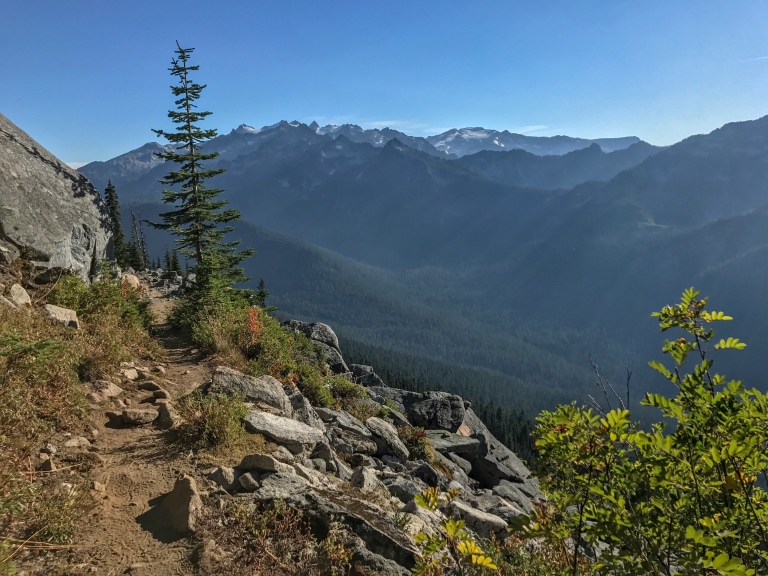 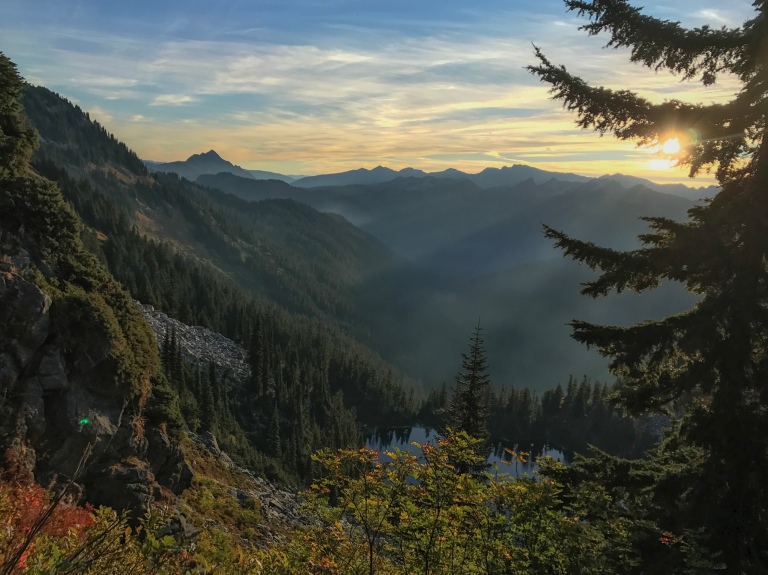 The trail went through many rock fields throughout the day. After one climb, there was a beautiful view of Trap Lake and surrounding mountain ranges. It was one of my favorite vistas.

With only a few miles before arriving at Steven’s Pass, I ran into a wonderful group of lady hikers. Kathleen was so nice and she gave me a bag of wonderful, fresh vegetables. Thank you so much Kathleen!

I eventually made it to Steven’s Pass, where SoFull and I hitch hiked into Leavenworth and parted ways again. I met up with my travel nurse friend, Nolan, and took a zero day, enjoying the unique little town!