I made yet another spontaneous decision to drive to Yosemite National Park, from Portland, for Thanksgiving weekend. Due to the driving time of 13 hours, I only had one full day to spend in Yosemite. This is what I explored during that short amount of time.

I left early Friday morning and after stopping numerous times to take a couple dozen pictures from the beautiful drive, I arrived in Yosemite on Friday night. I had done a little research earlier that day to discover that none of the campsites were reserved, so I did not feel like I had to worry about getting a spot when I arrived. However, I was shocked to find out that all of the 200+ campsites had been taken. While trying to comprehend how this could have happened, I noticed a bear sign warning campers that there had been dozens of bear sightings and next to this warning, was a photo of a bear’s head inside a car window. This picture was ingrained in my head; thank you for this Yosemite!

I found a spot to pull over and get a few hours of sleep, although I do not recommend this because camping and/or car camping is only allowed in designated areas. As I am lying there with my eyes closed, I couldn’t stop envisioning a bear breaking my window with his head inside my car. For over an hour, I was coming up with strategies on how to defend myself if a bear broke into my car. This resulted in barely any sleep; it is quite amusing how our minds work sometimes. I woke up before the sun, to get started on my long hike up to Half Dome. 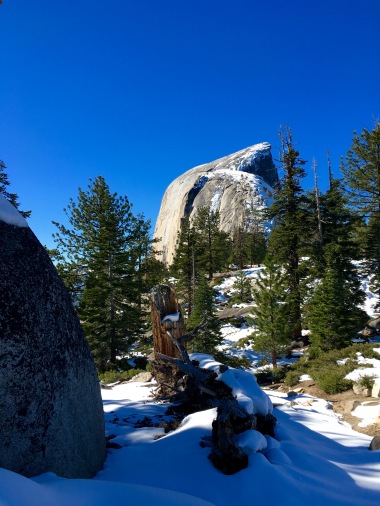 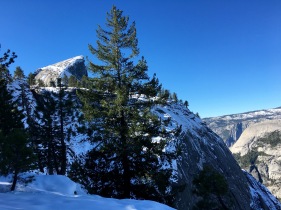 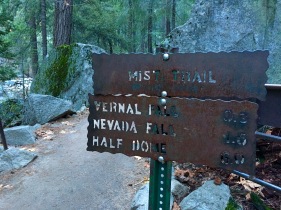 This is said to be a 14.2 mile hike via mist trail and due to the trail difficulty, takes 10-12 hours, so I knew that I needed to get started before the sun was up, in order to make it down before the sun went down. Although I got started around 7am, I had a little bit of difficulty actually finding the trail. I did not do as much research as I should have and lost service once I got to the trail. I finally found Mist Trail and followed it until I saw signs for Half Dome, which were throughout the hike. Once I found the Mist Trail, I had no trouble finding the trail to Half Dome.

Although the cables were down at the time that I hiked the trail, I really enjoyed it because there were only 4 other hikers that I passed during this time. Although I was disappointed that the cables were down, after hiking Angel’s Landing, I am kind of glad that was not an option for me. Another plus of doing it during the time that I did, I didn’t have to obtain any permits to hike.

The elevation gain during the hike, took a toll on me and this was probably one of the most exhausting hikes I have attempted, but also one of the most rewarding hikes. The Half Dome cables, when up, are two wire cables that give hikers the chance to go up the last 400 feet of the trail. I hiked up until this point. The area before the cables, along the trail, was very strenuous, icy and there was a lot of snow during the time that I attempted the hike. There were many icy rocks to climb up and over. This would be very challenging with a crowded trail.

The two waterfalls along this hike, are among my favorites.

There are hundreds of granite stairs up to Vernal Falls. I had to frequently pause to catch my breath. It was very challenging, but totally worth it. After taking several slow shutter photos, catching my breath, and continuing on, I came to Emerald Pool, which was nothing short of an emerald color. This is where things got very slippery and icy. If hiking after the tourist season is over, I suggest bring crampons and hiking poles, neither of which I brought with me for this hike. 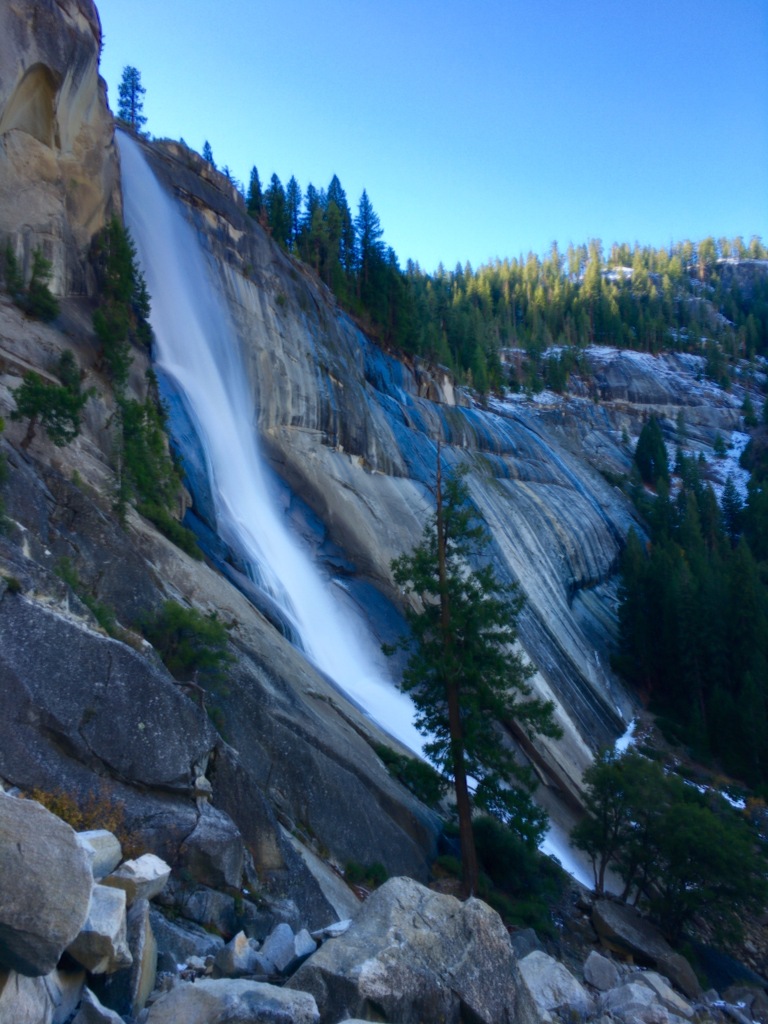 There are several strenuous switchbacks to get to Nevada Falls. On the way up to Half Dome, I did not want to waste anymore time, so I did not turn right to go to the actual falls, although I took many pictures of it on the way up. I did however, stop on my way back down. It was pretty awesome on the way down, although pretty crowded. I hopped along some rocks and was sitting on the rocks next to the falls, enjoying the sunshine and mist from the falls. This was my favorite park about Nevada Falls. Even though there were so many people at the falls, I was sitting there, past the railing, next to the falls, in complete solitude, listening to the white noise of the waterfall tumbling over the cliff’s edge beside my feet.

Half Dome took the entire day, and I was rather sore and tired after returning to my car. I was going to spend the following day in the park as well, but I was just ready to get back and into my own bed. On the way out of the park, approaching dusk, I was able to stop at Tunnel View to see a panoramic view of Yosemite Valley including El Capitan, Bridalveil Fall and Half Dome. This viewpoint is at the east end of the Wawona Tunnel along the Wawona Road (http://www.nps.gov/yose/planyourvisit/viewpoints.htm). This was the perfect ending to a well spent day in Yosemite National Park.