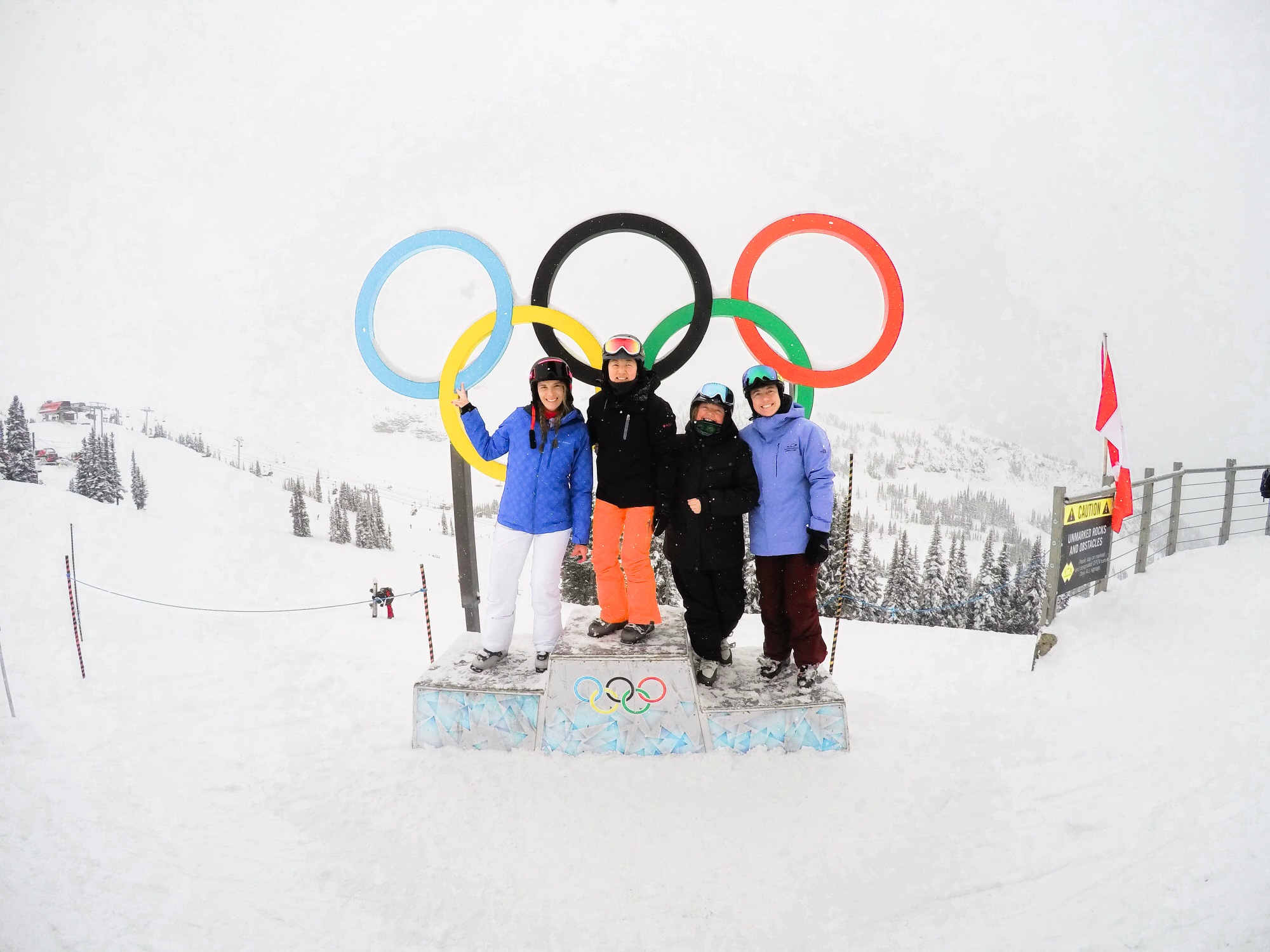 The Year of Outdoor Adventure Hobbies

This year, was the year to expand my outdoor adventure hobbies. Yes, I have recently (within the last two years), become obsessed with backpacking and hiking, but I realized when snow falls, I tend to not know what to do. I knew I needed to find a few winter hobbies! So, I decided to learn to snow ski!

There are plenty of places around Washington to learn to ski, but they typically have lessons for a number of consecutive Saturdays, for a few hours each Saturday. With spontaneous weekend trips, I couldn’t commit to several weekends in a row. I knew Whistler Blackcomb was quite famous for skiing, so that is where I decided to look for lessons.

Why a Women’s Camp?

Now, I know myself well enough to know, that if cute Canadian boys were somehow involved in the ski class, I would easily be distracted, and wouldn’t get the most out of the lesson. So, I decided to sign up for the two day, North Face Women’s Camp. I thought it would be awesome to have two full days of ski lessons, with women ski instructors and possibly make a few new friends in the process. No cute boy distractions, right? So, that was that, I was all signed up!

A few nights before my weekend of skiing approached, I became irrationally fearful of skiing. This fear resulted in two sleepless nights. Here I was, thirty something, learning to ski, and being scared to death of it. Does it feel like you’re falling? I asked myself. If I am going too fast, how do I stop? I should cancel. I just won’t go. Well, despite the fear, I went. Afterall, this was the year of new adventures. 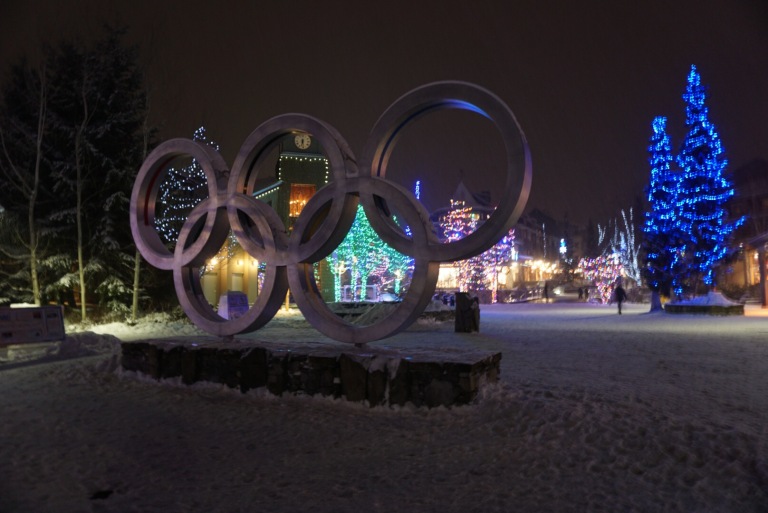 Now, for someone who has never ever snow skied, never been to a ski village, nor has ever been to Whistler, morning number one, was quite stressful. It all started with the drive from the hotel, at 6am. 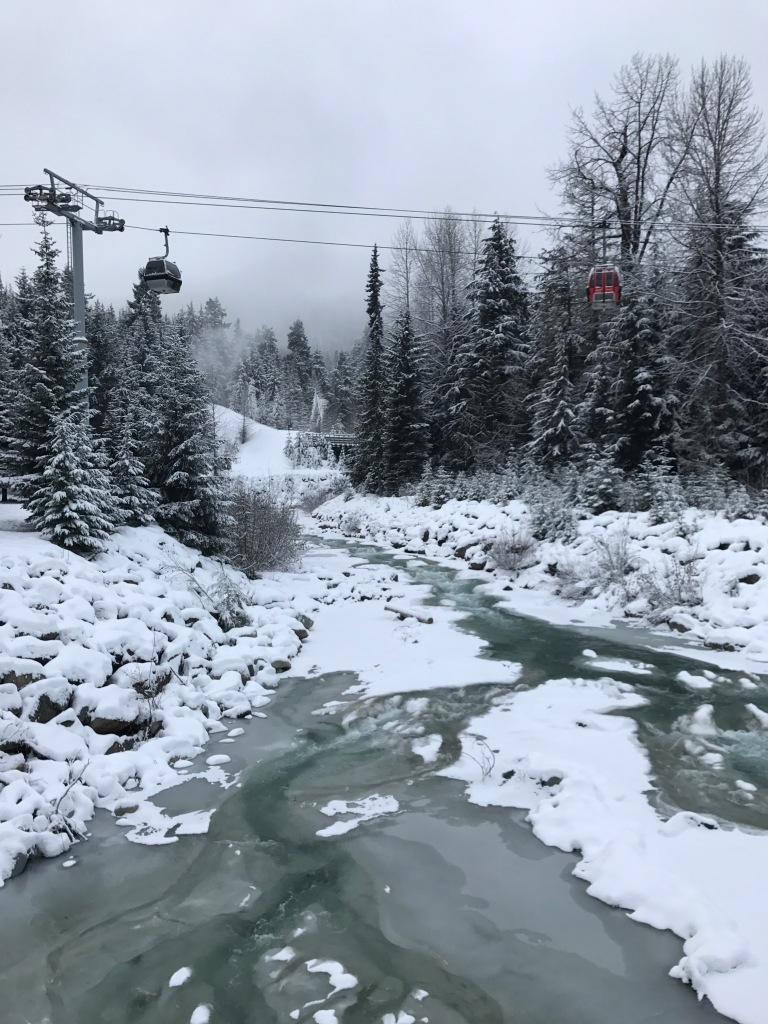 I stayed 32km away from Whistler, because it was a ton cheaper. Now, when the hotel website says it is only 20 minutes from Whistler, that isn’t taking into account traffic, or blizzard road conditions. When you can only go 30-40km/hr (don’t ask me to convert this to miles/hr), it takes a good 40 minutes, at least, to get to Whistler. Driving in a snow storm, through curvy mountain roads, in the dark, with anxious skiers riding your butt, isn’t the most awesome thing to be doing. What was almost more fun than that, was trying to figure out where to park. 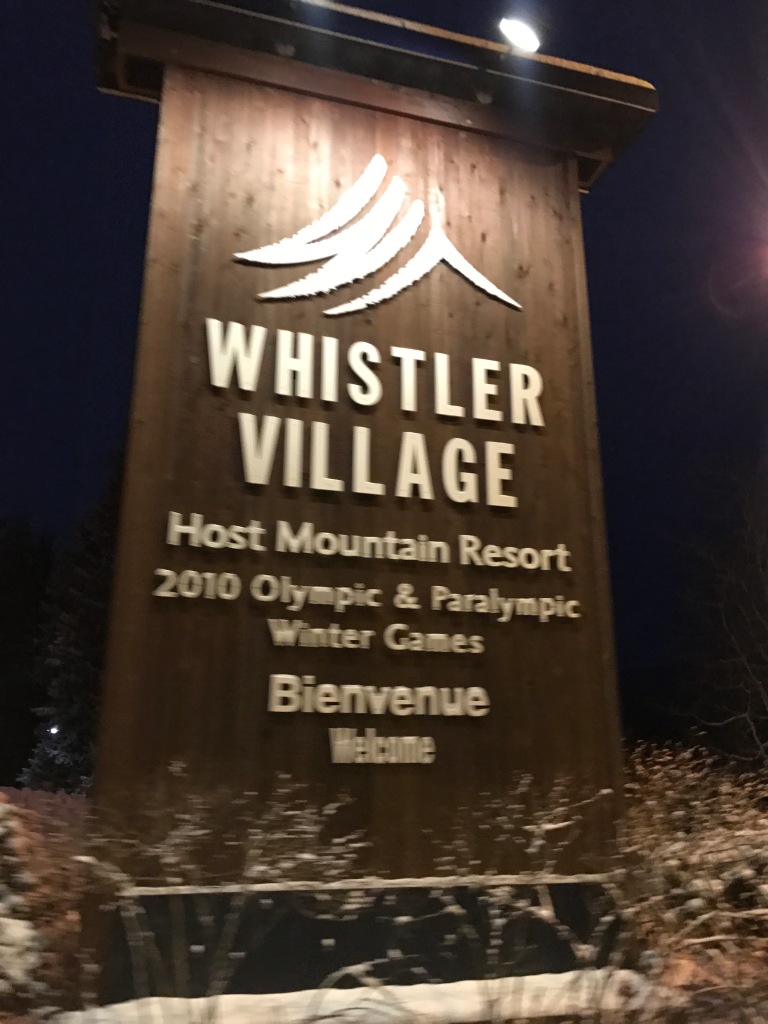 Again, for someone who had never been to Whistler Village, this was a nightmare. It took me over two hours to find out where to pick up my lift ticket (because there is no address to the guest service locations that I could find), where to park, and where to rent skis. Note: ski rentals do not come with a ski camp. I suppose I should have known that. After finding parking, at 27 dollars for the day and getting my lift ticket, I anxiously made my way over to the ski rental shop. Another disaster for the non skier. 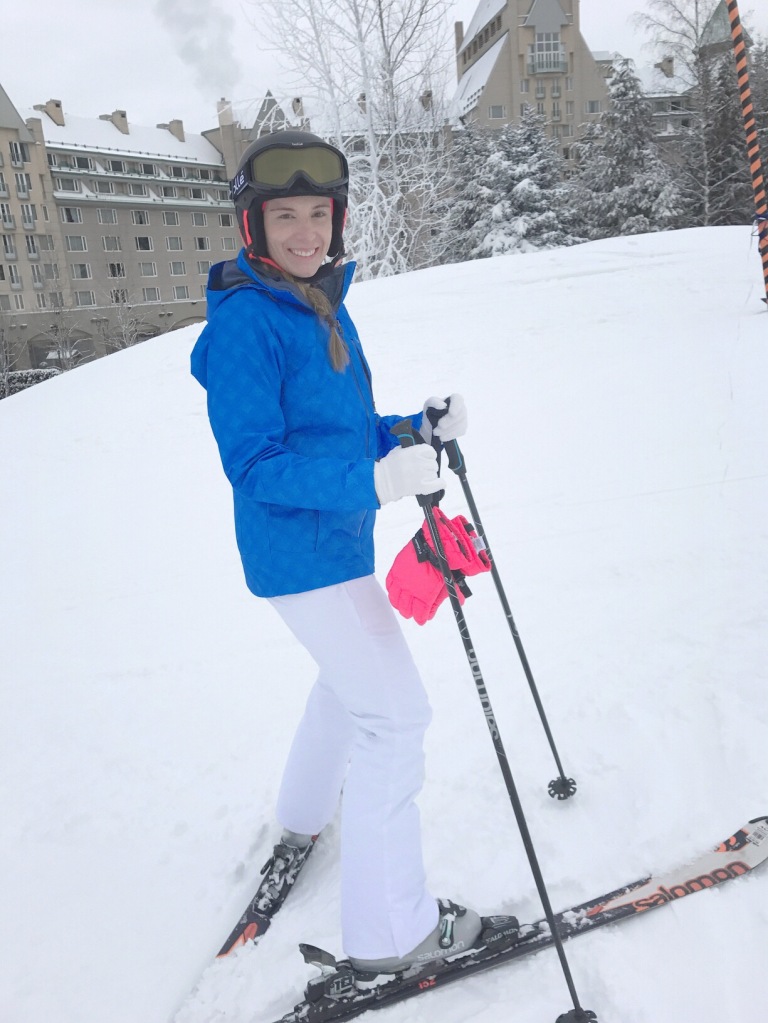 I probably should have started off with, “I’ve never done this before”. I was handed a boot by the gal at the shop and then she just walked away. I looked at this huge boot with buckles and plastic and thought, I can do this. I felt like I was trying to fit my big foot into a glass slipper that didn’t fit. The fact that I was sweating and thought I was going to die from being so incredibly hot in all of the layers and ski clothing, wasn’t helping the situation. I finally told the gal I had never put a ski boot on before, and she assisted in showing me how to shove my foot into boot. I then grabbed my skis, poles and helmet and awkwardly walked out of the ski shop, trying not to drop any of the equipment, and most importantly, trying not to pass out. I am sure I looked like a 5 year old, on their first day of kindergarten, who was late to class because she got lost.

I finally made it to the meeting location for the ski camp, and that was when I realized, that the majority of the women there, had been skiing before. I was sent to the level one table, where I met my instructor and two other gals, who also had never skied before. Out of all of these women, only 3 of us, had never been skiing. After getting lost in conversation with my group, my morning anxiety slowly went away. I simply loved my group, and my instructor. 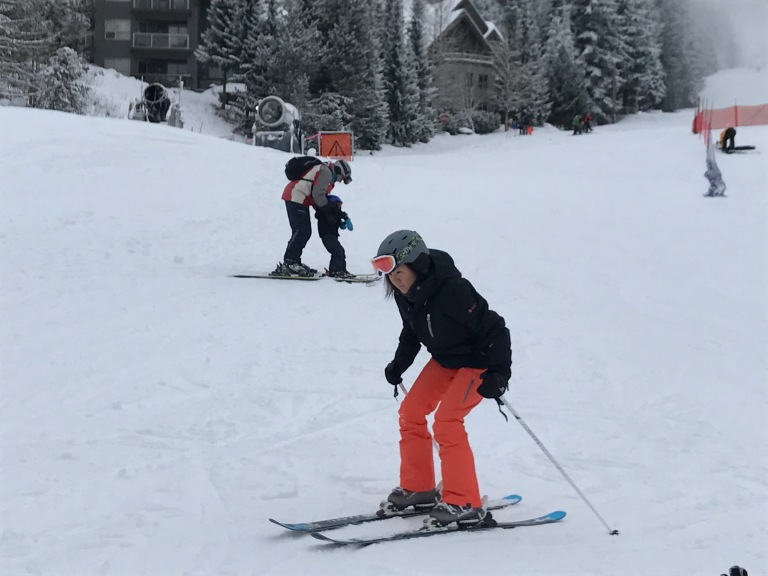 We spent the morning on day one, on Blackcomb Mountain, learning the basics. We practiced moving with just one ski on, moving with both skis on, side stepping up hills, moving across level terrain, and different moves with our skis, for speed control and stopping. At the time, I didn’t understand the reason for practicing some of these techniques, but by the end of the weekend, it totally made sense. 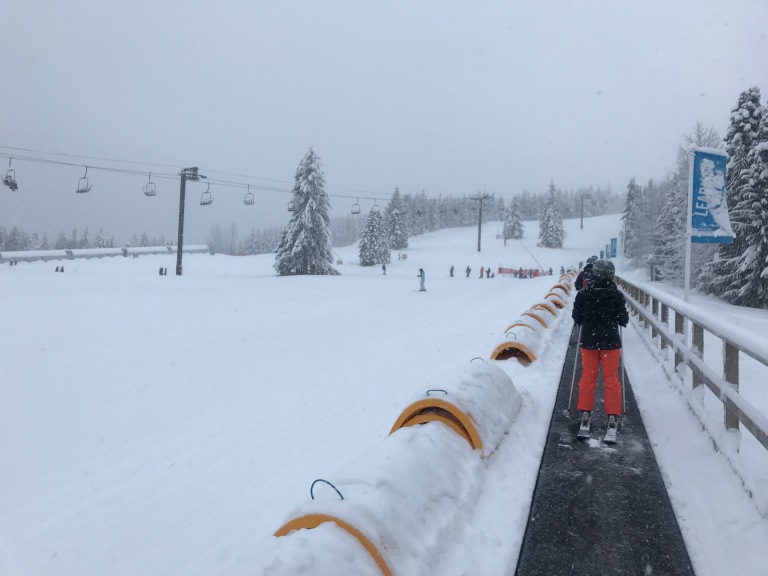 We rode up the carpet at first, which was a relief, because the ski lift was initially, a very scary thought. At the end of the day, we rode on the ski lift, to a little bit higher learn to ski area. 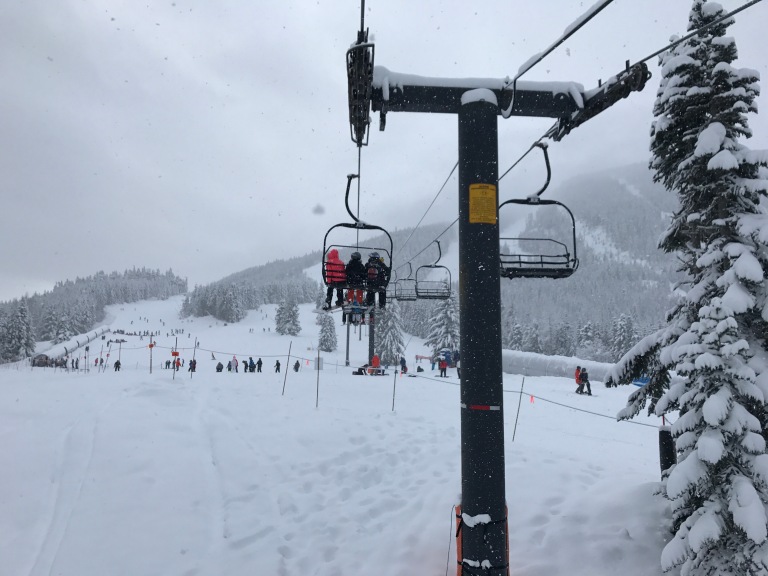 There is a saying, “don’t let the door hit you on the way out”, well, I now like to say, don’t let the ski lift hit you on the way off. The first time I got off the ski lift, I was not quick enough, and it hit me in the butt, knocking me over. During this very ungraceful moment, I took out my ski lift partner, and knocked my head on her ski. It took a moment for me to realize what just happened, but I got up, and shortly after, we were laughing about it. Day one taught me that skiing isn’t as scary as I thought it would be; however, it will take a lot of practice!

We spent day two in Whistler Mountain, which was so awesome. We started off on the carpet learn to ski area, but not for long, because it got super crowded, super quickly. After a couple of warm ups on the shorter carpet area, we headed to the top of Whistler Mountain for lunch and touristy attractions. 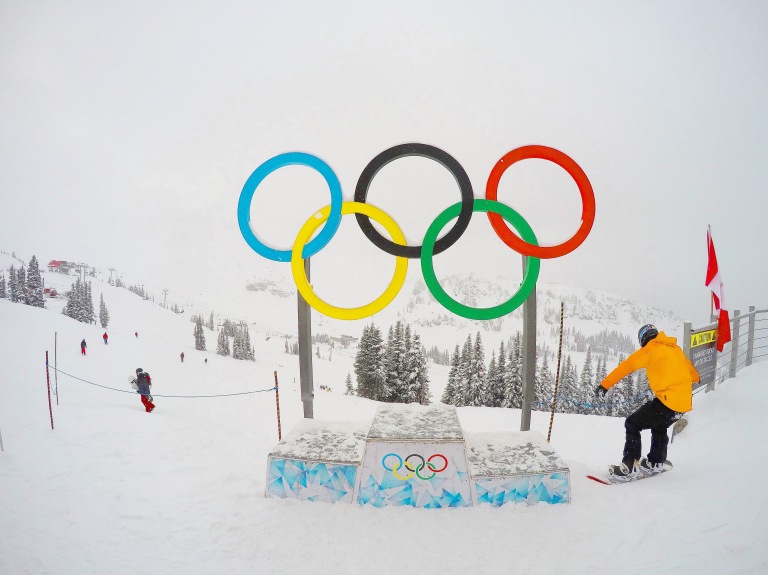 Such as, the Olympic Rings. 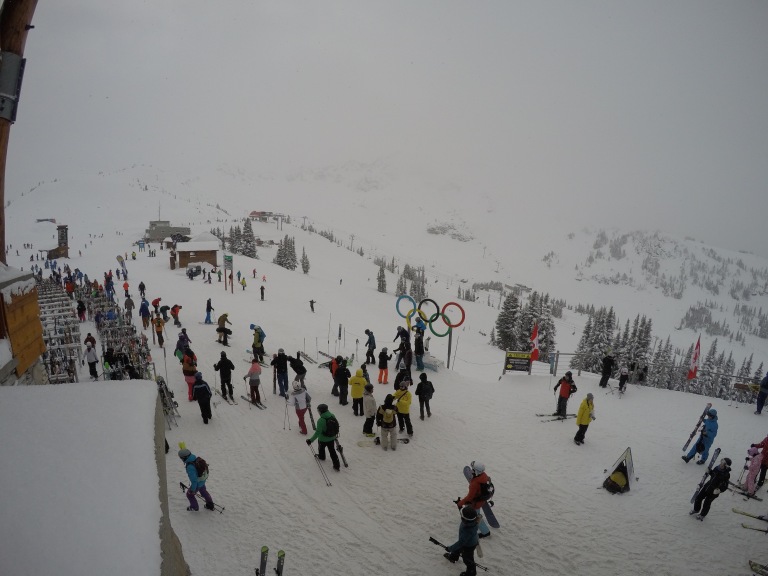 And the amazing view… oh wait, we were in white out conditions! 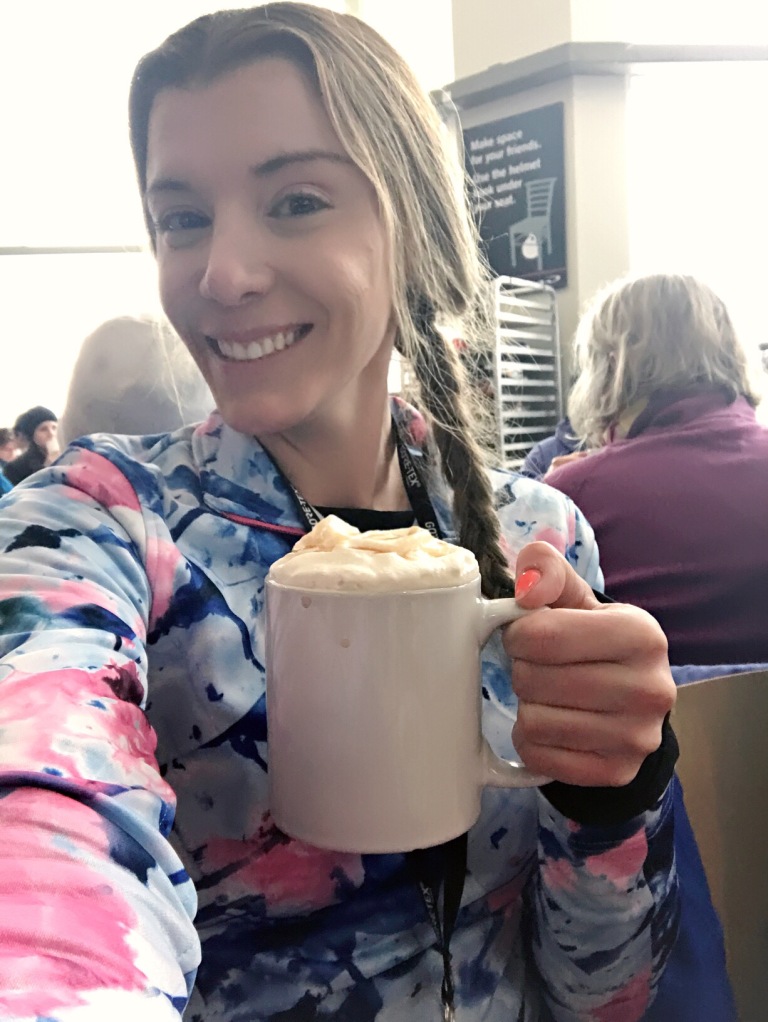 We spent the afternoon, on the longest learn to ski area. Primarily focusing on, getting on and off the ski lift, controlling our speed, and having fun! 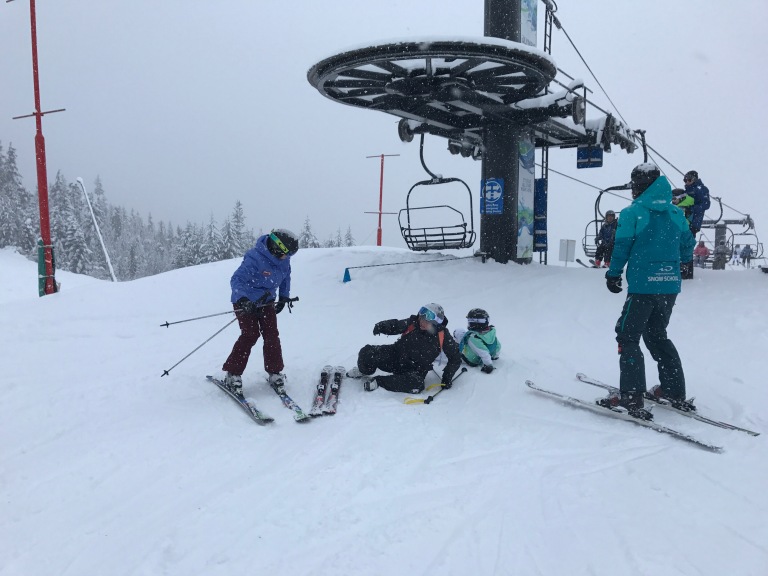 The ski lift was still a problem at times; it’s one of the hardest part to master! Although I did not fall again, I took out a snowboarder because my ski pole was on the other side of her. Oops… sorry whomever you were! Our last run, was completely on our own. I feel confident that I could make it down a green run on my own! Mission accomplished!

Sadly, the day had to come to an end. I said goodbye to my new friends, turned in my skis (which was much easier than the rental process), and headed back to Seattle! 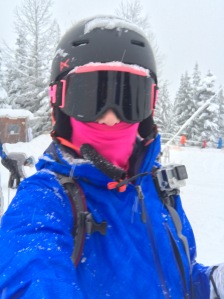 Nailed it! Until next time Whistler Blackcomb!

One thought on “Learning to Ski at Whistler Blackcomb”