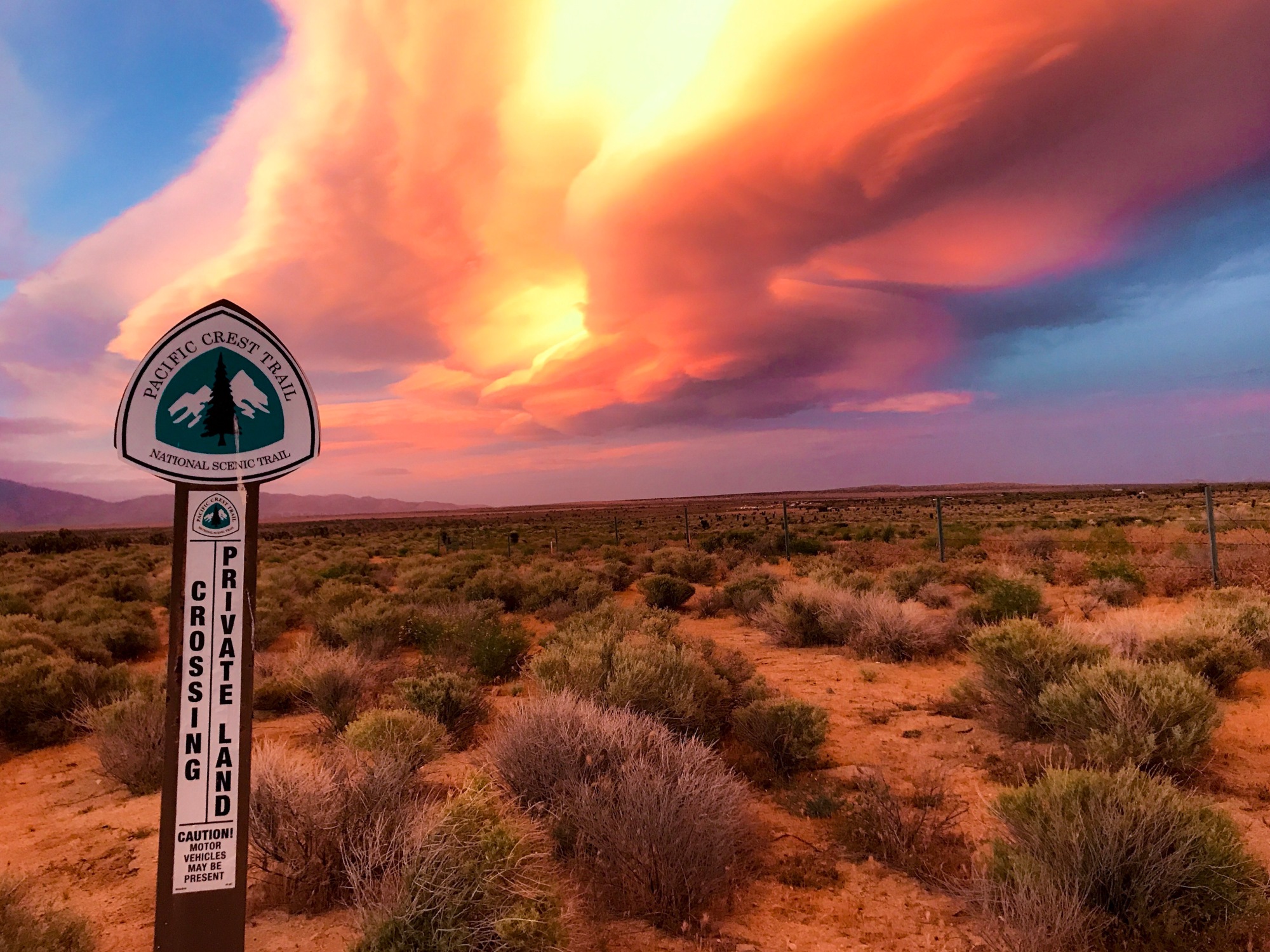 I left Casa De Luna around 7am, parting ways from the two separate groups I had been hiking with.

It rained off and on all day. There were several ascents and descents.

As the day went by, the clouds scattered and the cool air, got colder. The wind was blowing cold air and we were quite chilly by the time we arrived at camp.

Sawmill Campground was a very nice campground. It was large, had fire pits, and plenty of space for tent camping. Let me repeat that, plenty of space for tent camping. We had caught up with a large group of hikers, because of our high mileage days. Why on earth, about 10 hikers which we didn’t know, decided to put their tents right next to the tents of my friends, is beyond me. 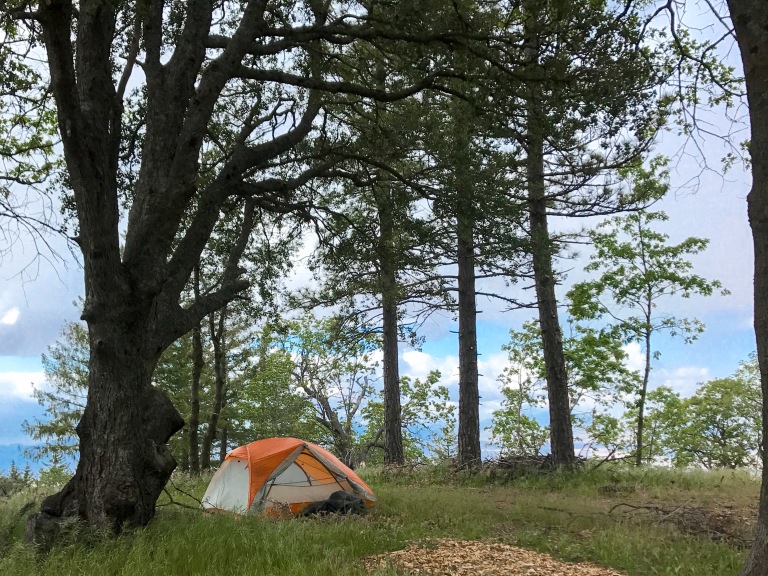 I always put my tent in an isolated spot, so I don’t have to hear the snoring, farting, coughing and musical squeaking pads of others. The three other friends I hike with, always put their tents close to one another. So, the unfamiliar faces of a new group of hikers, pitched their tent, no joke, 5 feet from all sides of each of my friends. I found it a bit amusing. I had even said to each new hiker that showed up, “there is plenty of space, in less windy areas, just behind us”. It was honestly the most bizarre thing. They didn’t just come and set up and quietly make dinner and go to bed. They were quite loud and were up later than we like to stay up. This was when we knew we had to step up our mileage to get away.

On a positive note, I did meet up with a friend that I had met at Hiker Heaven and we decided to hike together the following day.

30 days on the trail! I can’t believe it! It really has gone by so quickly.

The trek from Sawmill Campground to Hikertown consisted of walking up a sand hill, then back down, up and back down… I think you get the idea. Beautiful scenery with the Sandhills, aqueduct and mountains in the distance.

Hikertown is on trail, which looks kind of like a ghost town. It’s a bunch of trailers set up like a mock town. 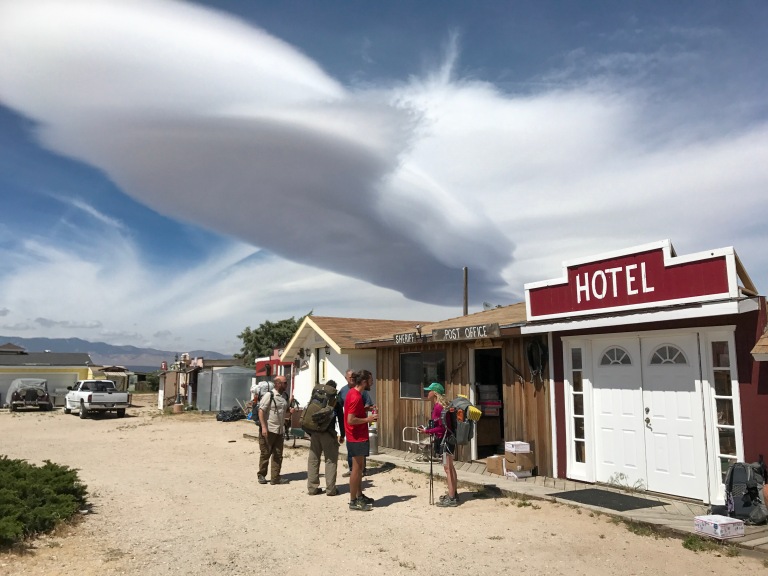 Each trailer has a different theme and are set up as rooms for hikers to stay in. The Cafe/convenience store has a shuttle from the little mock town, 4 miles down the road. We all stopped there to eat before continuing on to the aqua duct. I of course had a grilled cheese, bacon cheeseburger, French fries, a cheese danish, a vanilla pudding and 3 sodas! I could have kept eating but didn’t want to be in a food coma!

After Hikertown, I started the infamous aqueduct. Apparently, the aqueduct is known to be a long, hot, waterless, tedious section of the PCT.

Most people either hike the 17-20 miles at night, or in the early morning. I wanted to knock out a big chunk this afternoon and evening and the rest of it the following day.

I started the LA aqueduct alone, but as the sun started to set, I waited for a few of my friends to catch up for some night hiking company!

Joshua Trees surrounded me as I walked this long path. These tree, which are native to the southwest, which makes trekking through them, an even more unique experience. 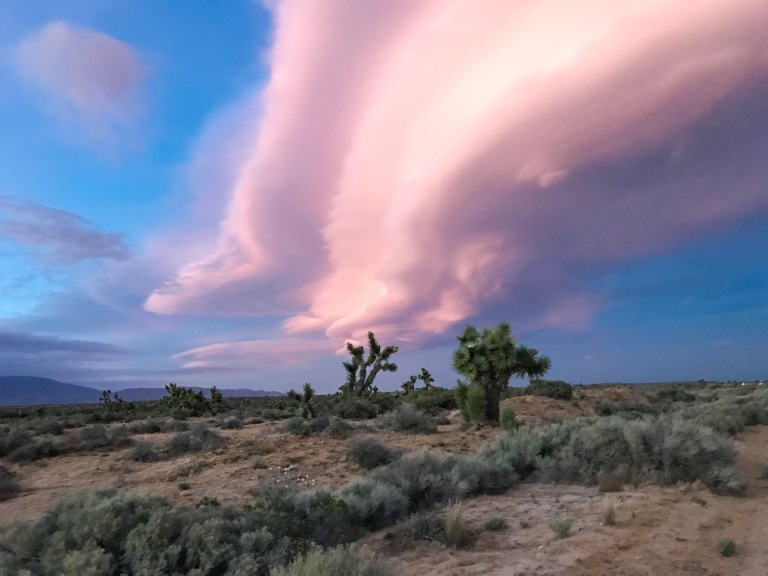 Their leaves, used in the past for weaving baskets and sandals, start broad and come to a very sharp point. The sharp hard leaves can be very dangerous! Ironman can attest to this; blood was drawn as he stood up and hit his shoulder on a bunch of leaves!! Ouch!!

Apparently, this animal didn’t care about the wet pavement. He/she, like many of us, wanted to leave their footprints in this wonderful life! 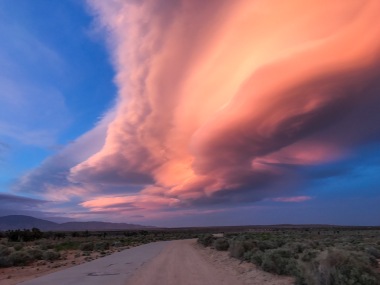 Although flat, long and tedious, the sunset was absolutely spectacular.

This ginormous, oddly shaped cloud, which stood out with orange, pink and yellow colors.

After the sun disappeared behind the mountains, the colors it left behind, made the sunset uber unique and unforgettable.

I completed my first 30 mile day on day 30! It was the rest of the gang’s second 30 mile day. I was happy to be with them on this day.

We managed to find a decent camp spot behind some bushes, to block the wind. My body didn’t notice any difference between a 20 mile day and 30 mile day; that was exciting! Actually, my body felt a lot better on day 30, than it had in several days.

The night prior was a no tent fly (waterproof/wind barrier cover for tent) kind of night… That is, until I was awoken at 3 am by raindrops on my face. At first I thought maybe my body was merely tingling from the 30 miles we had walked. I then ran my hand down the outside of my sleeping bag and indeed, it was wet. I got up in a flash, grabbed my tent fly and put it on quickly, faster than I ever had before.

The first 9 miles of day 31, were along the aqueduct. The rain lingered in the distance, creating a rainbow masterpiece with the help of the sun. Our experience with the aqueduct was nowhere near dry and hot. As previously stated, it had rained throughout the night and into the morning. 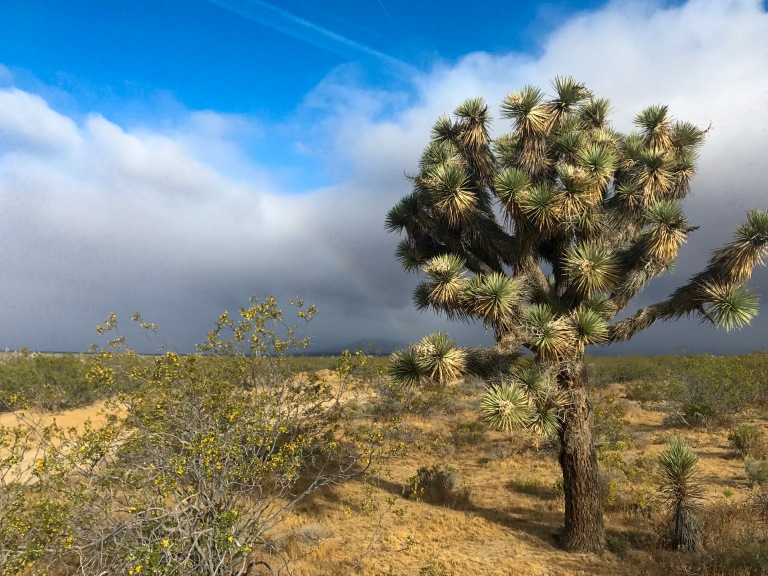 The dark clouds lingered until the afternoon.

The beautiful rainbow, which painted the sky from the dark clouds to the clear sky, remained throughout the morning.

The flatness of the afternoon was soon accompanied by wind turbines.

Unbeknownst at the time, these turbines would become a common theme over the next several days! 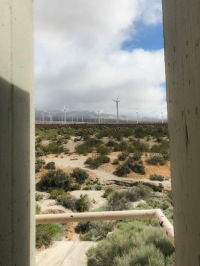 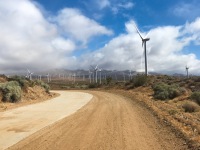 The chilled wind along the aqueduct kept me from taking off many layers throughout the day. The wind was only to get worse, and stronger.

After the tedious and flat remaining section of the aqueduct, we began to climb… again. 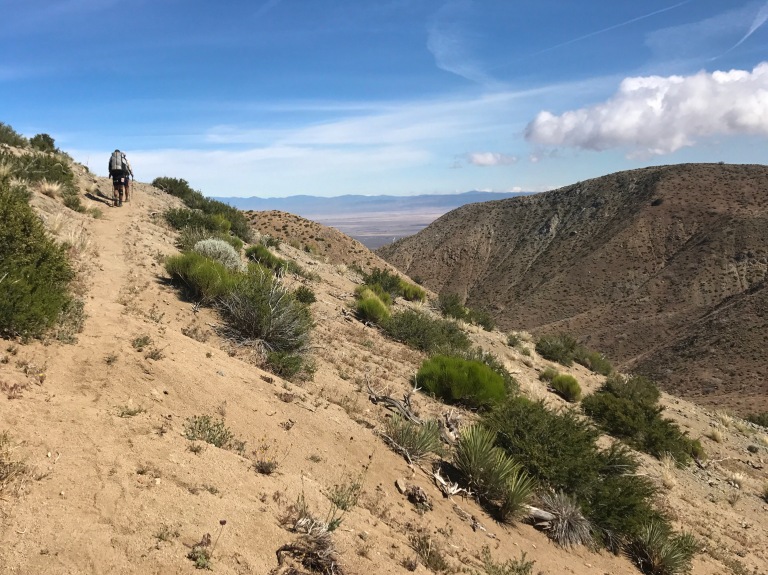 The climb wasn’t nearly as bad as Baden-Powell, but it was pretty steep, and long. That wasn’t the worst part of it though. The wind was stronger than any wind I have ever felt. several times it blew me off the trail, several feet.

I do believe the only thing that saved the wind from blowing me off the face of the mountain, was shoving a trekking pole deep into the soil, holding on for dear life and praying. I’m sure the weight of the pack helped hold us down a bit as well. 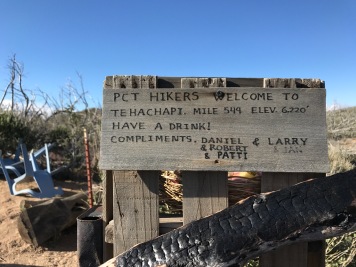 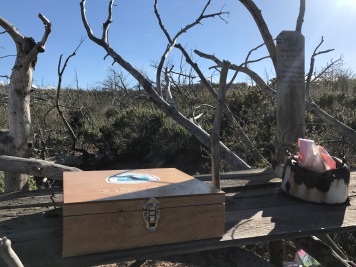 Near the end of the climb, we came upon a hikers “diner”, set up by trail angels. Unfortunately, it was too windy to enjoy the set up. We all had an apple and knew that we needed to find a camping area, sheltered from the wind, before the sun went dow
About a mile or so later, we found the best spot we could, to set up our tents. It was a small, crowded area, nestled in between bushes and trees. Although it helped tremendously, the wind didn’t allow us to rest easy. At one point, the wind took my tent stakes out of the ground and threw my tent into the trees. Several large rocks and throwing my stuff in my tent, helped keep the tent grounded.

To help stay warm and to keep the tent from blowing away, Hiccup and I shared my tent. It was a very long, loud, restless night.

Things I was grateful for today:

The wind had died down from the day prior. Apparently, the day prior was a wind storm, with 60-65 mph wind gusts. That explains a lot!

The morning was a pretty easy morning, mostly downhill. We continued to see the turbines. Apparently the wind turbines in this area provide electricity for LA. At first they were pretty neat, but I was a bit sick of seeing them at this point. As you get close enough to them, they almost sound like an airplane flying above.

The afternoon wasn’t as easy as the morning. The last 7 miles consisted of a pretty exhausting climb, followed by a very very steep 3 mile descent. 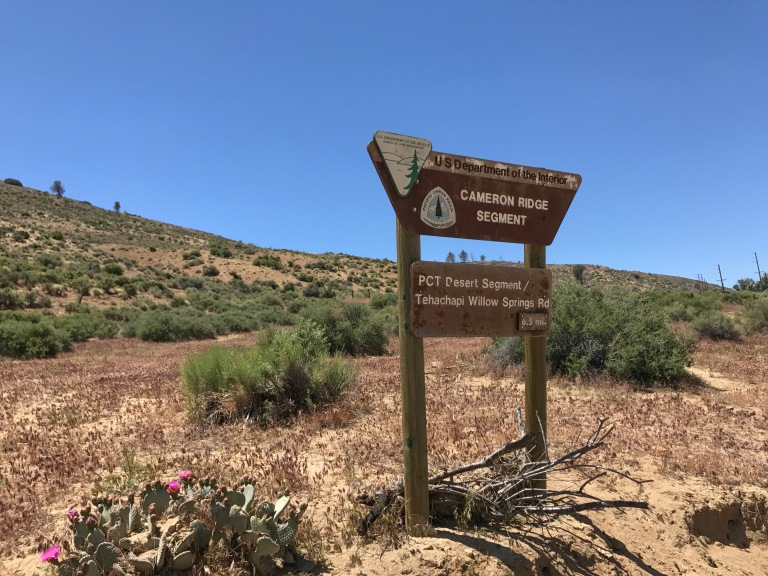 The hitch from mile 566.4, along highway 58 has been said to be a bit more difficult than the hitch 7 miles prior. However, I really wanted to get those miles over with before going into Tehachapi. Which brings me to tell you how grateful I am for trail angels, once again.

Why am I grateful for the Tehachapi trail angels? I guess you’ll have to read the next blog to find out! Cheers!