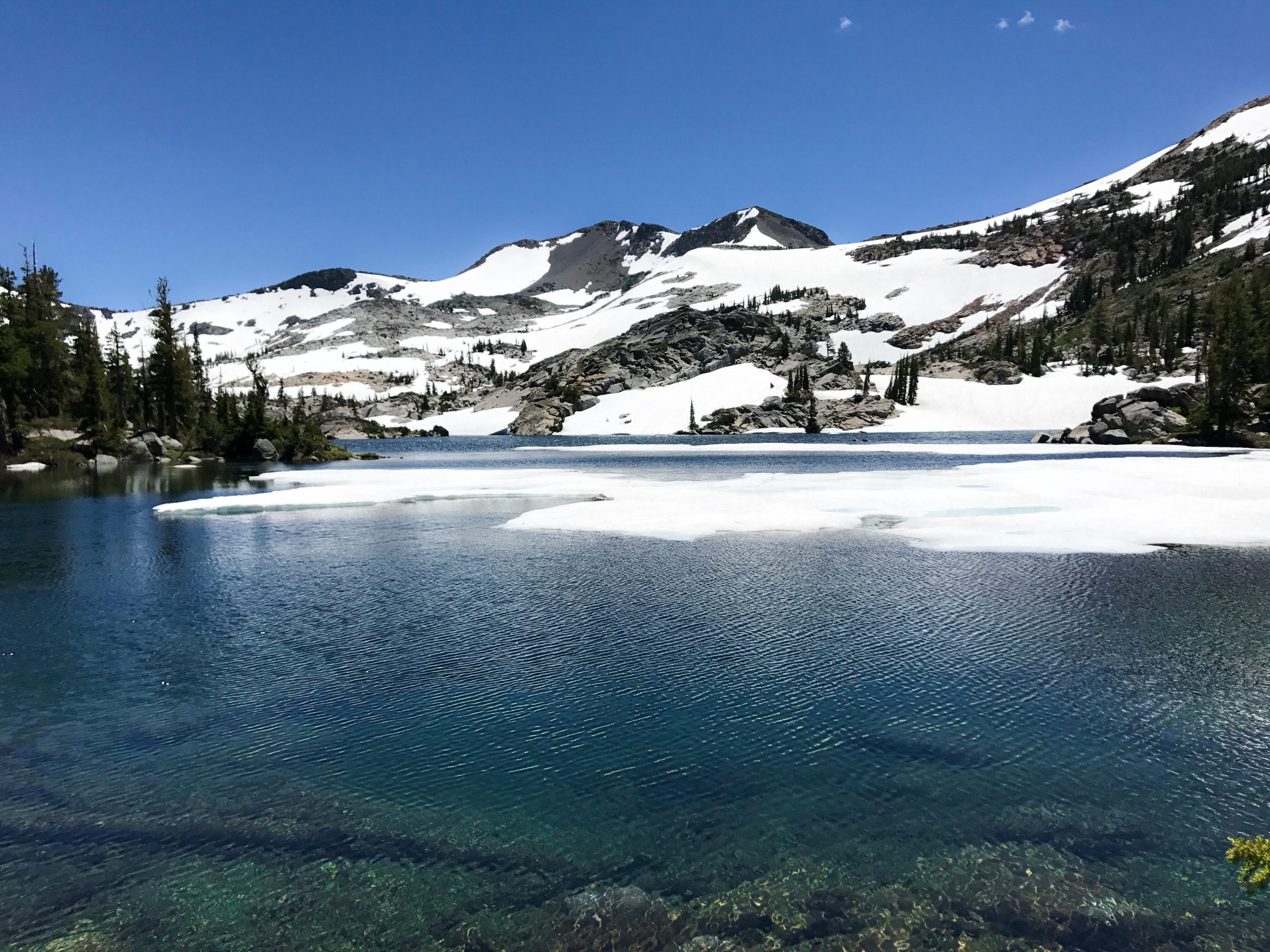 A few weeks prior, at Vermillion Valley Resort (VVR), I met a wonderful couple who were waiting on their son, who was also hiking the PCT. We chatted a bit and I had the most pleasant morning with them. On my way back to the trail, I ran into their son, Ranger. I didn’t think I would see him again, but he caught up with me in South Lake Tahoe. Despite both of us being primarily solo hikers, we decided to change things up and hike together for a bit.

Sheryl dropped me off where she had previously picked me up and took Ranger to Echo Lake, where I would meet them in a a little over a mile. Ranger had already done that mile, and I didn’t want to skip it.

Sheryl told us about a ferry that went across Echo Lake and through a small channel to another lake and it was quite the experience; however, it skipped 3 miles of the PCT. I chose to take the ferry for the experience and miss the 3 miles of trail. I was okay with this after 300 + miles of snow travel; it was a treat to myself for completing the High Sierra in 2017… One of the biggest snow years. 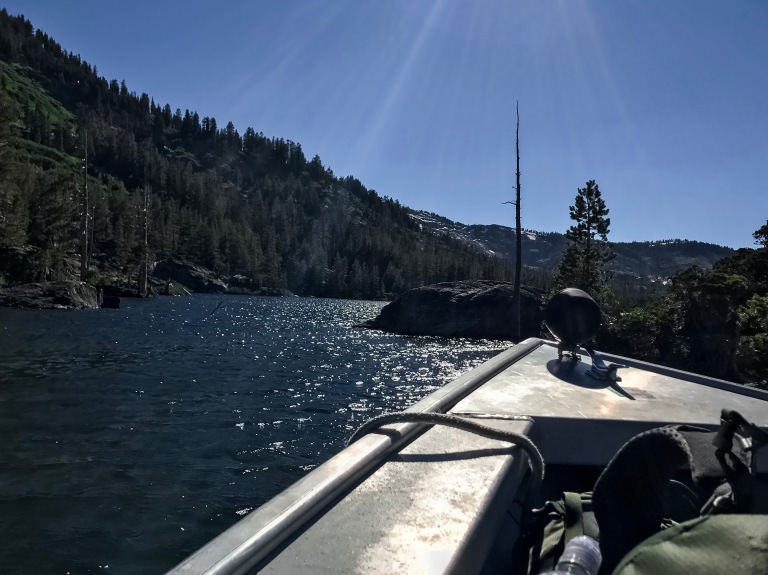 The ferry was pretty neat and dropped us off on the other side of the lake, close to the PCT. I never regretted this decision and still don’t.

I was feeling a bit sluggish and we didn’t get started until 5 pm, so we only hiked a few miles before finding a perfect camp spot at Aloha Lake. 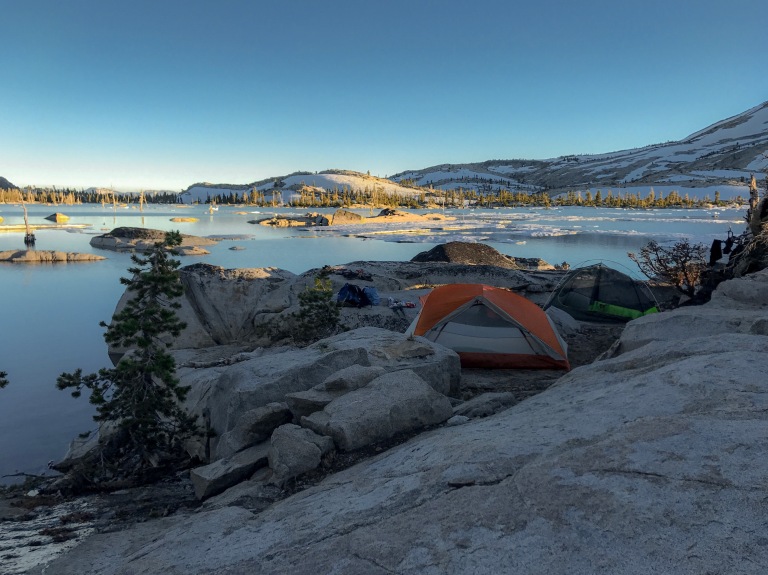 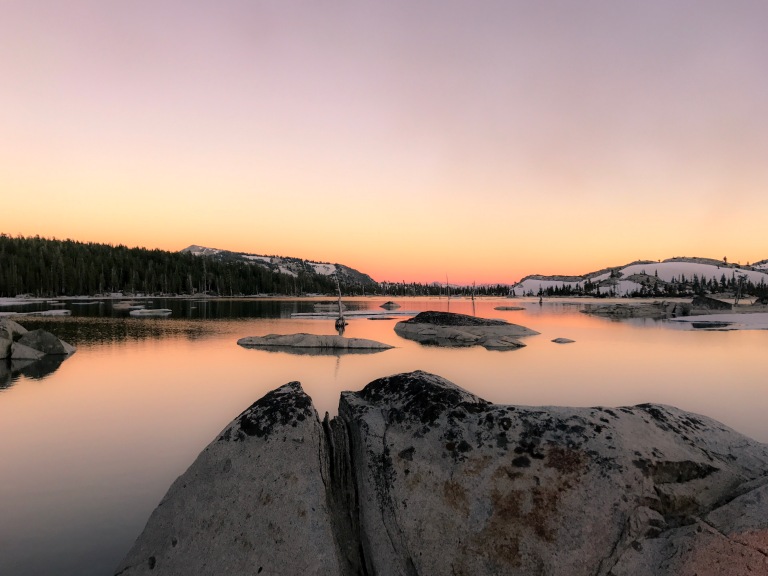 ﻿We woke up next to gorgeous Lake Aloha, had hot breakfasts and started our day. It was a beautiful day. 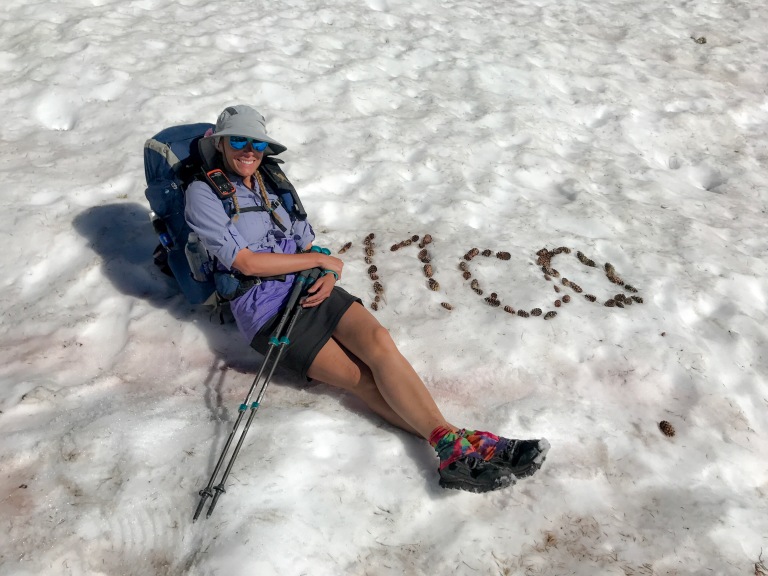 Shortly after the start of the day, we passed 1100 miles! 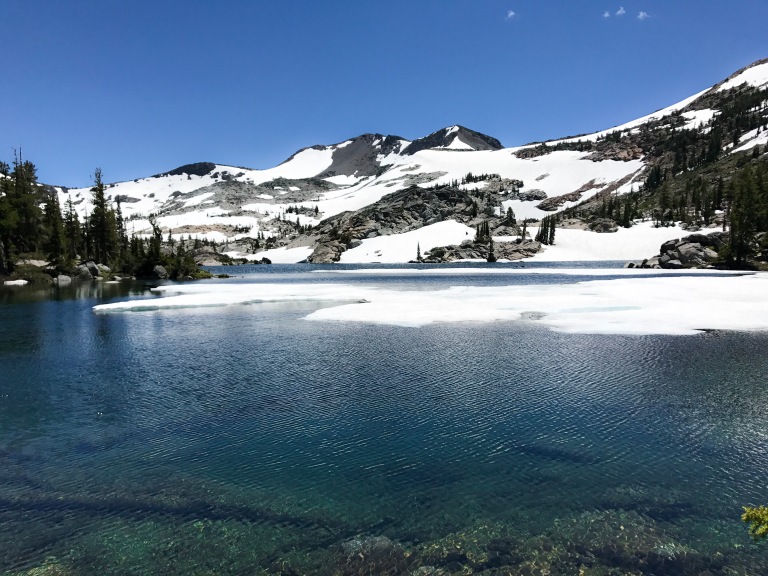 Desolation Wilderness was very picturesque and filled with quite a few awesome lakes. 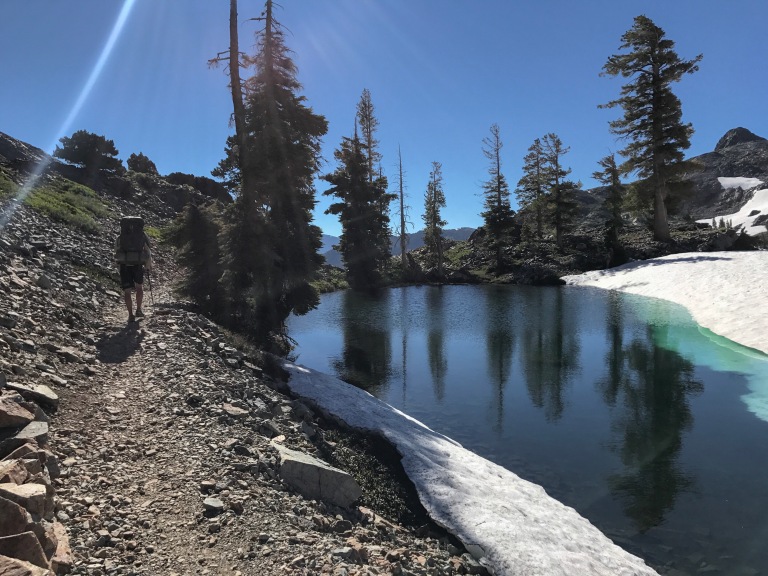 I highly recommend taking a backpacking trip there!

The trek up to Dicks Pass and down from Dicks Pass, consisted of a lot of… can you guess?? Snow! 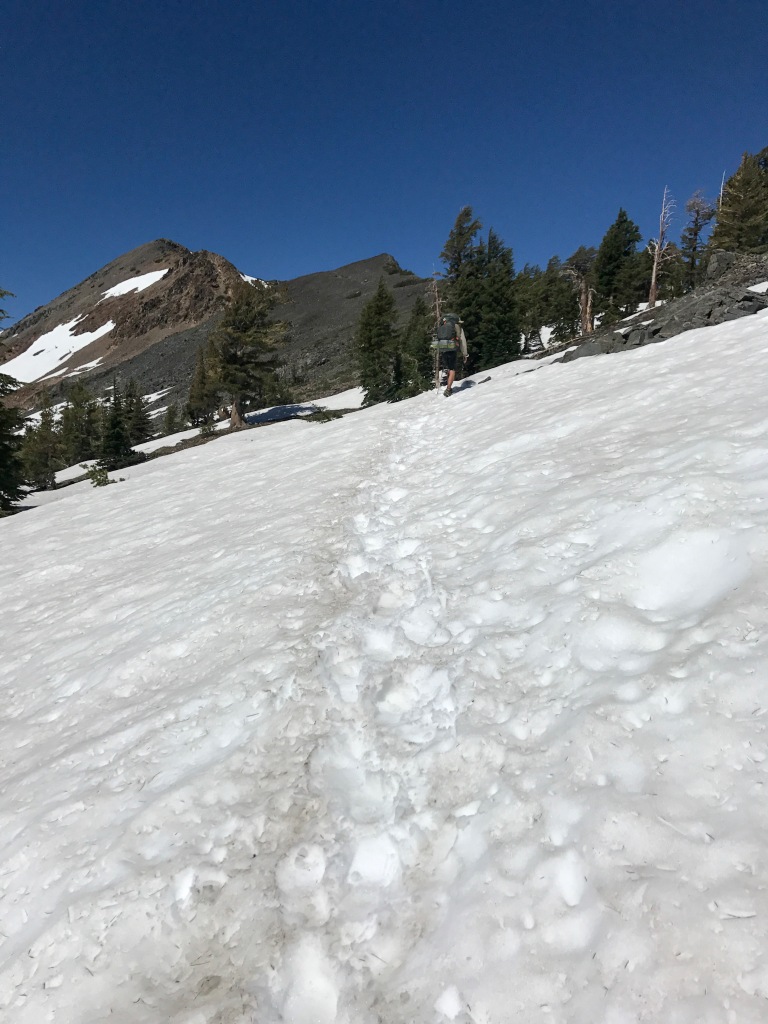 I’ve found that a lot of the passes have false summits, if that is how one might word that. I would come to what looked like it would be the top of the pass, until I reached it, and then there was more. 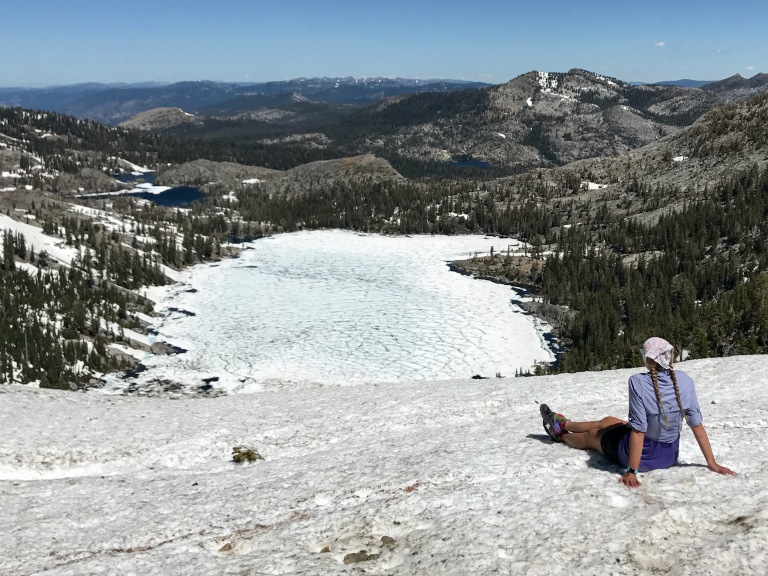 This was the case on Dick’s Pass as well. The photo above, is not the top of the pass, but almost!

We had a lot of fun in the snow.

We glisaded, shoe skied and I fell a few times, but it was still fun.

Another wonderful part of today, was after Dicks Pass, it was a nice day of downhill and flat hiking, with minimal uphill. It felt glorious.

We passed a lot of weekend backpackers. The ones that stood out the most, were a group of younger teenagers that I asked where they were headed, and how excited they were and then they asked us where we were headed. When I said Canada, they got so excited that we were PCT hikers and said “whoa that’s sooooo cool”. It really touched my heart.

Within 2 miles of camp, Ranger stopped me and said “shh… look”. As I looked about 100 feet from us, down the hill, we saw a beautiful bear with a caramel brown coat. Within a few seconds, he looked up from eating whatever he was eating in the tree, made eye contact, Ranger waved at him and he ran away. Too quick to get a photograph. It’s funny that all the times they required a bear canister, I never saw a bear and now that it isn’t required and we no longer carried them. Pretty great experience though.

Our camp spot for the night, wasn’t as beautiful as the night before, but it was next to water. We ate warm dinners and tucked away in our sleeping bags.

Shortly after I had gone to bed the night prior, the aching of my body awoke me, which along with a fever, kept me up the majority of the night. I was unable to move much and bouts of nausea would come and go.  It was actually quite frightening being so sick in the wilderness. Ranger and I went over our options to get me off the trail. After reviewing a map, we found a trailhead with parking 1.5 miles ahead. I texted my wonderful trail angel from South Lake Tahoe, Sheryl, to see if she was able to come and pick me up from the trailhead and she was able to, thank goodness.

I was able to muster enough strength to pack up and barely make it the 1.5 miles to the parking area. After driving the 1.5 hours to pick Ranger and I up, Sheryl took me to the emergency room, where I was diagnosed with severe dehydration, a staph infection on my shoulder, fluid in my right knee and an unknown viral infection causing the fever and aches and pains. 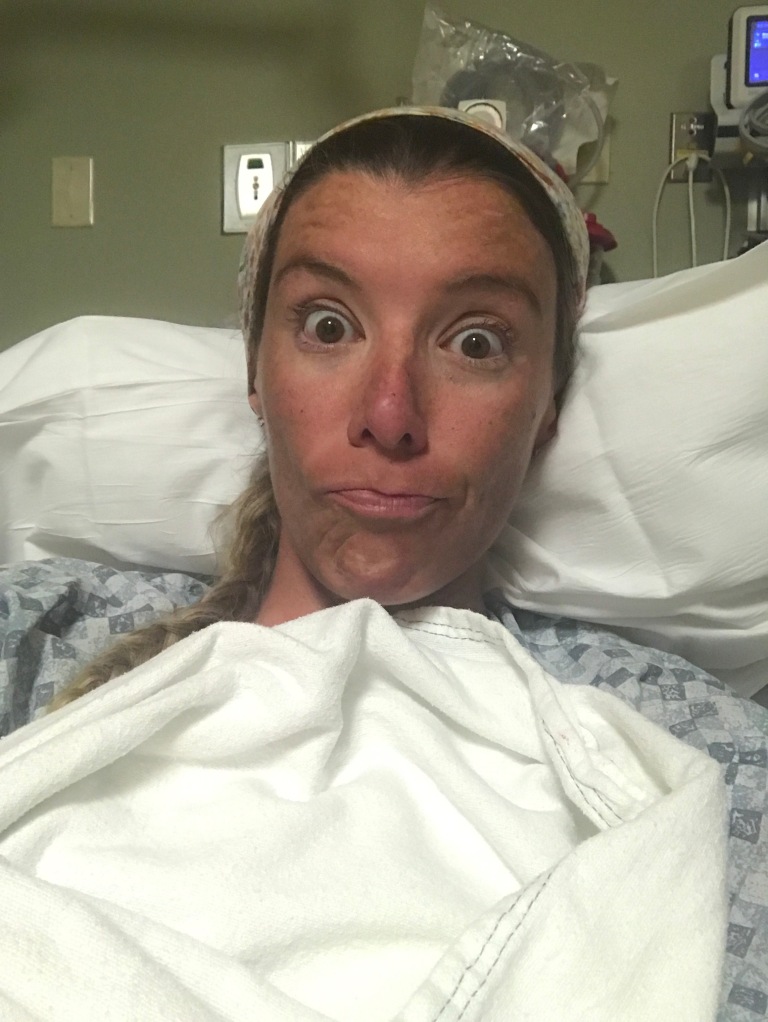 After getting 3 liters of fluid, morphine, zofran, benedryl, a dose of antibiotics and the doc draining my abscess on my shoulder, Sheryl took us back to her house, where I slept for 20 hours. The following day, I wasn’t feeling any better, I was actually feeling worse. So, I did some research on Dr. Google and came to the conclusion that I had gotten Giardia and had been sick for quite some time, as the symptoms slowly develop over time.

I called in a favor from a fellow surgeon I worked with and was able to get the medication for Giardia that day. Within 24 hours of starting the medication, I felt 90 percent better than I had in weeks. I am very thankful for Sheryl and Ranger, who sat by my side for the majority of the hospital visit and continued to take care of me thereafter.