I slowly rolled out of bed and realized the time… 8 am! So, I packed up, braided my hair, threw the sheets, towels and loaner clothes in the washer and said goodbye to sweet sweet Cate in Etna.

I had my thumb out for maybe 60 seconds, when a very nice retired man picked me up. He told me he takes a couple of trips a day to the trail during Hiker season. He’s been living in Etna the majority of his life. As he dropped me off at the trail, another Hiker asked for a ride back and he looked at me and said “Daniele?” I said yes, not really recognizing who was asking. I have met so many hikers and cyber met people through Facebook groups and Instagram, it’s really hard to remember how I know someone.

Lint is kind of a hiking legend in the thru-hiker world. He is a 3 time Triple Crown Hiker. Meaning, he has hiked the Pacific Crest Trail, the Appalachian Trail and the Continental Divide Trail 3 times each! Not only is he a hiking legend, he is also the one who sent me a very kind message on Instagram, politely informing me that the photo I posted of a camp fire at Aloha Lake was illegal and I should consider taking it down, which is another story all together. He was so nice about it, even told me he has made mistakes in the wilderness as well, and we can only learn from these mistakes and teach others. He’s kind of a movie star in the hiker world, so I was pretty stoked to meet him. 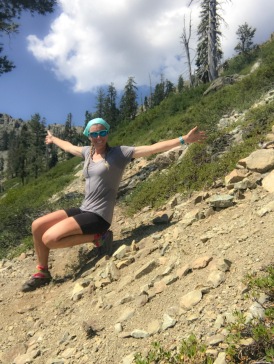 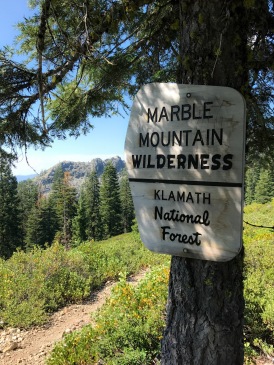 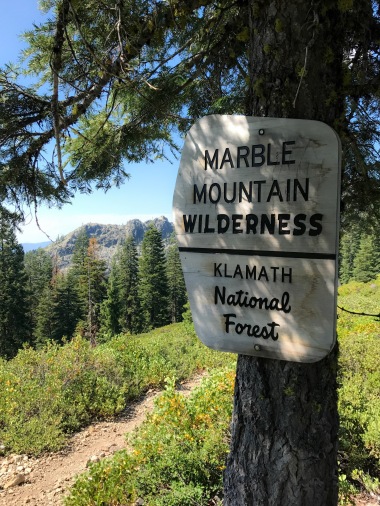 The white limestone and contrasted black rock, gives the mountains a marbled appearance, hence the name. It was so beautiful.

The wildflowers really stood out with the white limestone mountains in the background.

I had to walk over a couple of very small snow areas today. I had almost forgotten how to walk on snow… just kidding!

I also saw several helicopters. One in which was carrying something by a rope. Pretty neat. However, every time I heard a helicopter I would triple check my GPS device to make sure I hadn’t accidentally pressed the SOS button again.

Dark clouds entered into the sky and halfway through the day, I found myself in yet another hail, thunder and lightening storm. 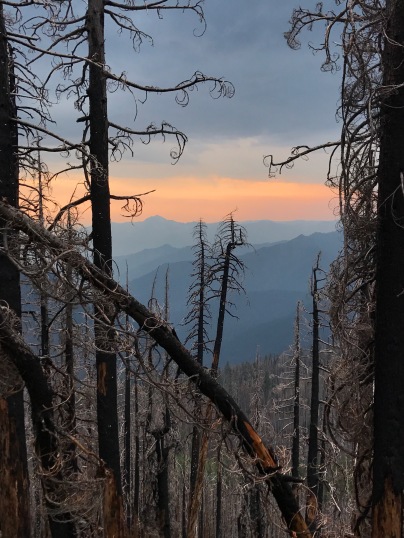 I really wanted to get to Siead Valley the following day, so I pushed on through the storm. 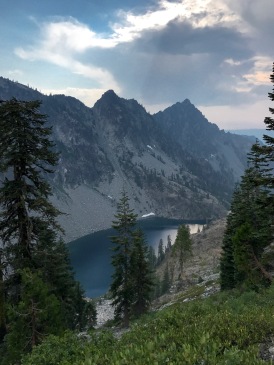 He definitely rewarded me for walking through the storm with the most beautiful rainbow I had ever laid eyes on.

The clouds were dark with clear sky beneath them, and a bright complete rainbow, ran across the sky.

I was a bit slower today, taking a lot of photos, so I didn’t do as many miles as I wanted to, and arrived at camp with almost no daylight left. I had just enough time to put up my tent, before the rain started again. God is too good to me sometimes.

Thimble berries, blackberries, raspberries were the theme of the day.

My 810.2+ mile shoes, did not enjoy the 6 mile road walk to get to Siead Valley. The first 2ish miles were on a gravel road. The soles of my feet could feel every pebble. The blackberry picking and consumption distracted them for a bit. 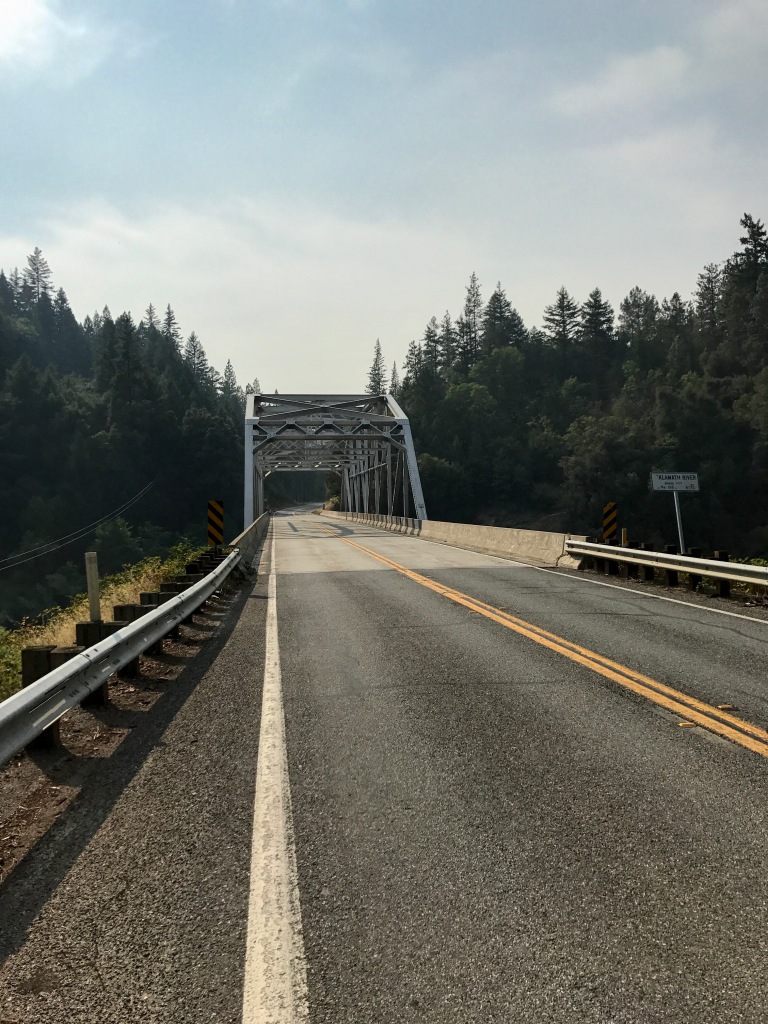 The gravel road soon turned to a black paved road, which was not any better. I had to keep telling my feet that as soon as we got to the Siead Valley store, they would have new socks and shoes and to just keep walking. I will say that 4 cars stopped to ask if I wanted a ride. I politely declined their offer, since the road walk was part of the PCT. One wonderful couple gave me water, offered me food and asked if I needed anything. 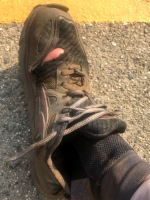 I got into Siead Valley around 5 pm. I picked up my resupply box and new shoes. I got a couple of things from the store and headed to the RV park. For $17.00 I was able to do laundry, shower, charge my electronics, connect to wifi and camp there if I wanted.
I met Papa Jon, who runs and owns Casa De Luna with his wife. I ran into Franger and Beast. I had not seen those guys since Yosemite, so it was so great to see them. I would have loved to stay, hang out and camp with them, but I knew that if I camped there, that I would stay for the famous Siead Valley Cafe Pancake Challenge in the morning, probably buy more food that I didn’t need at the store, and not leave until after 9 am.

The climb out of Siead Valley is known to be steep, exposed, waterless and 4,000 + feet of elevation gain in 8 miles. I didn’t want to start that at 9 am and climb through the heat of the day. My plan was to go 2-3 miles to the nearest camp and wake up early to complete the climb.

My feet felt brand new and as if I was waking on clouds with my new shoes. As my shoes wear out, my feet soon forget what the shoes are suppose to feel like when in good condition. So, as my shoes were wearing out, my feet didn’t know any better until the shoes started to fall apart. With my feet feeling so good, I decided to do more of the climb.

Within an hour of the climb out of the valley, I was drenched in sweat and had drank almost 2 liters of water. I was thankful that I chose to get the climb out of the way without the sun beating down on me, making the climb more difficult. It was so humid and still very hot. About 3/4th of the way up the climb, my body was so tired, my legs felt like jello and my mind was shutting down. Once the climb was over and I hit 40 miles, I desperately began searching for a camp spot. I finally found a decent spot, set up camp and was in bed by 1 am. Although my body was not as sore as I thought it would be, I doubted I would be doing many more 40 mile days.

I was super eager to get going the following day, as I knew I would be entering into Oregon!!! However, my exhaustion was greater than my excitement and it wasn’t long before I fell into a deep sleep. 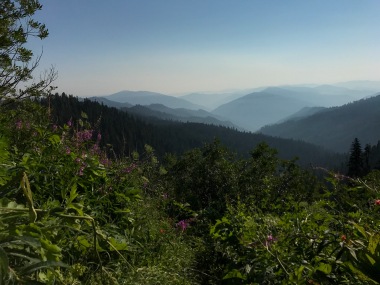 Do you ever get that feeling that you’re headed toward a forest fire? Well, I did… and I was. There were helicopters attempting to put out the fire, flying above for hours. I even saw firemen waking around. I was 3 miles from the border of Oregon. I was a bit worried that they would tell me that the trail was closed. I continued to rehearse in my head what I would say to them when they told me I had to turn around, or find a way around the fire. 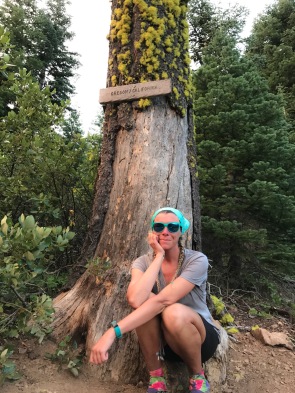 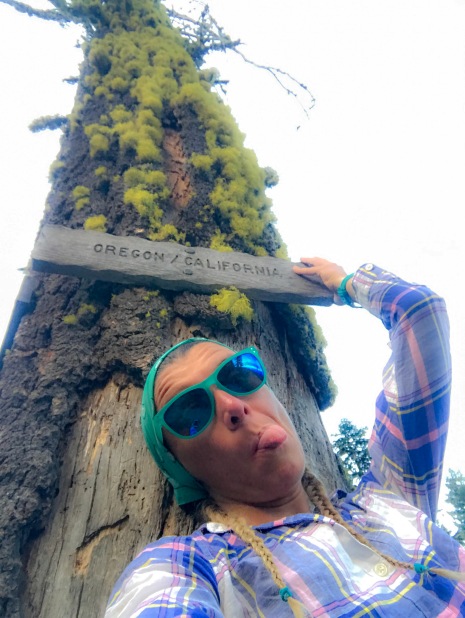 Thank goodness it didn’t come to that and finally, I wasn’t in California anymore!

This was a very emotional moment for me. California was beautiful and very diverse, but it was so long. It took so much out of me, but I gained a lot from he experience as well. It was so hard to believe that I was finally in Oregon.

I camped shortly after making it to the Oregon/California border, as it was getting dark and didn’t leave me much of a choice. 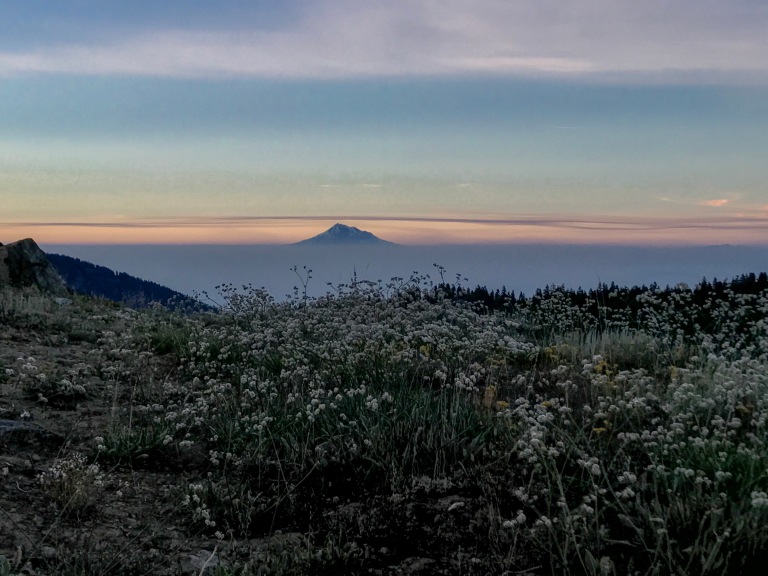 Per usual, the sunrise was beautiful. I could still see Mt Shasta lingering in the distance. 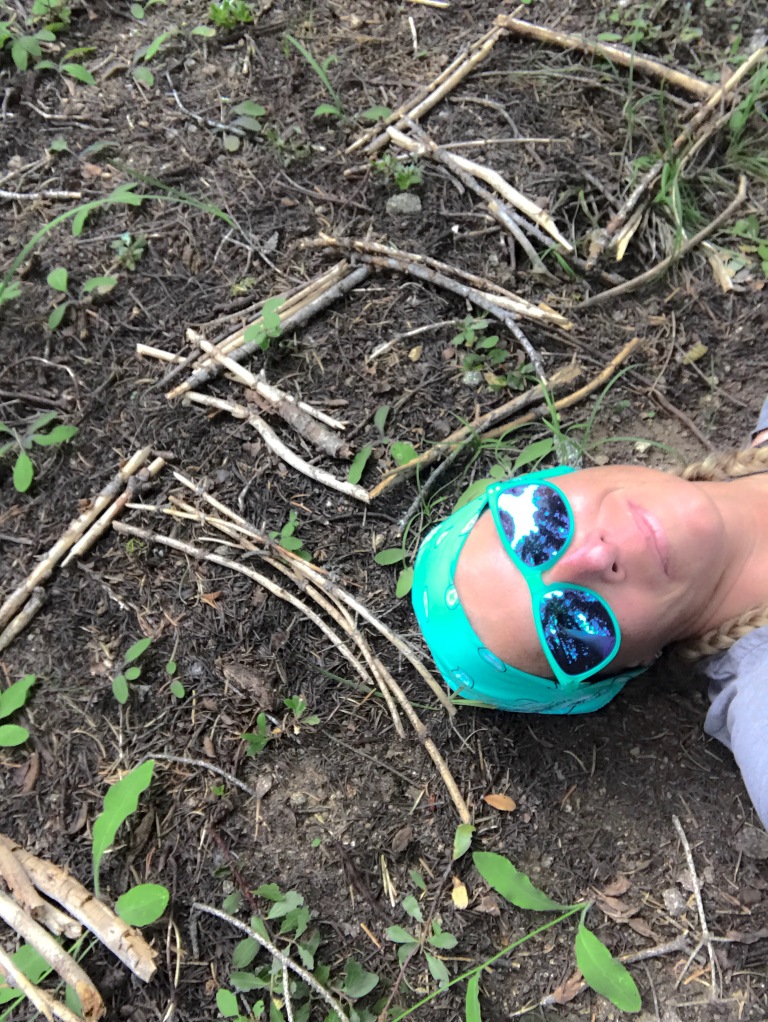 Two mile markers in a 4 day period! I was crushing miles. High mile days became a bit of a game I played with myself. Anything under 20 miles, was no longer good enough. 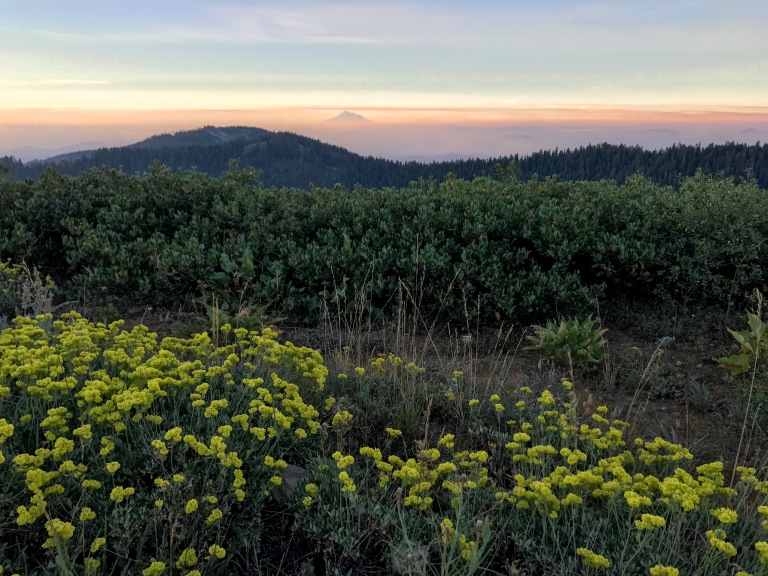 Right before coming to Callahan’s Lodge, I came across the most awesome trail magic. A cooler full of cold cheesecake and cold sodas.

Hitching to Ashland was super easy. I waited maybe 5 minutes before getting a ride. He was even nicest enough to bring me with him to the store, before dropping me off at the hostel. The hostel was called Ashland Commons and was probably the nicest hostel I’ve stayed in on the trail. However, I do believe the owners are a bit OCD with their labeling of everything and rules all over the walls of the hostel. The people who I had made friends with during the day, were also staying there.