Nolan dropped me off, where he had picked me up and although I had an amazing time, I was ready to be back on trail.

I had considered taking a detour to climb Mt. Thiesen, but with all the smoke, I wouldn’t have been able to see anything. I mean I didn’t really need any additional exercise just for the heck of it! 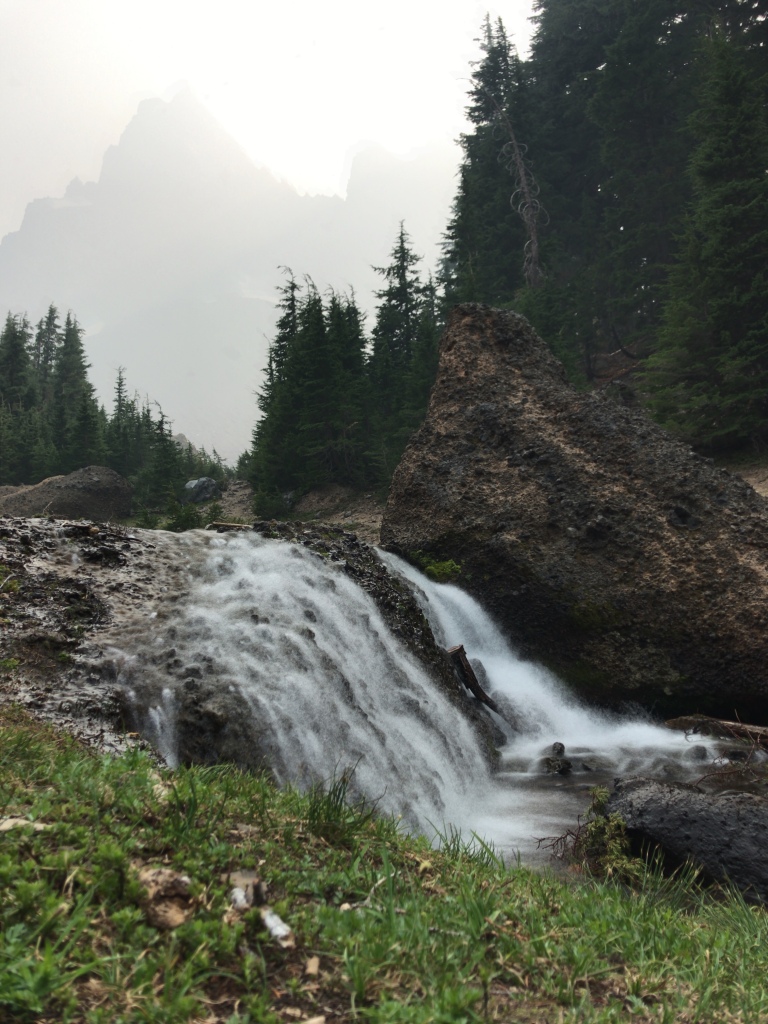 Not only did the smoke surround the trail and obstruct the beautiful views, but the smell of the distant smoke was a bit overwhelming. My throat and eyes were bothered by the days, followed by the nights, of constant smoke.

I had taken 2 full days off and 2 half days off to watch the eclipse and spend time with my own personal trail angel and friend; now, all of the trail faces that I passed by, were all new.

I was able to keep a steady 3.3 mph pace for 28 miles. Water was scarce. I had one liter for 16 miles. I was relying heavily on a water cache, and thank goodness it was stocked. I drank a liter of Gatorade at the cache and stocked up before the trek up Windigo Pass. 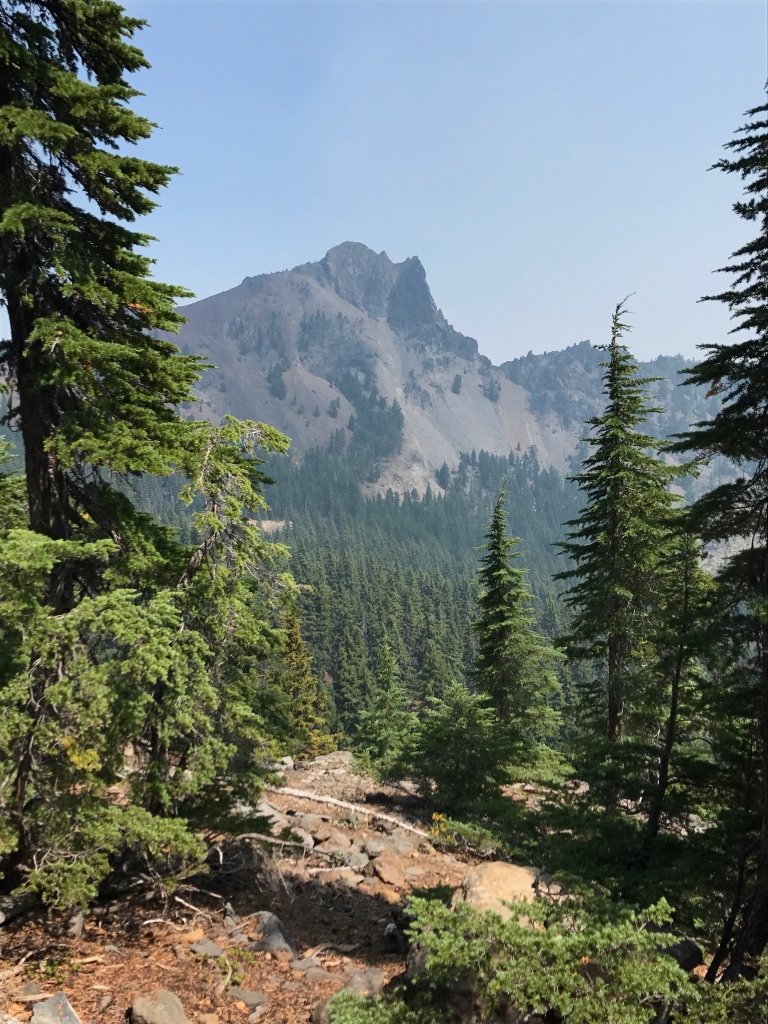 It’s so strange going over a pass that is mainly in the forest and did not have snow. Had I not seen a sign, I would never have known it was a pass that I was going over.

It was a rather boring 28 miles, until I reached Summit Lake. The lake was a lot bigger than I expected. It was beautiful. Had the sun been shining more, I would have gone swimming.

I decided to take a long break at Summit Lake since I was making such good time. I made a hot meal, washed my legs and feet, switched out my socks and filtered water. I tried to make sure I was drinking plenty of water to make up for the morning.

After my long break, I was very sluggish and had a bit of a climb ahead of me. It was a very long 8 miles before camp. I had a terrible headache and my face felt very flushed. I was guessing this was in part from dehydration and in part from the smoke inhalation the last several days.

There was still a bit of snow on the mountains and I walked a few steps through some of it. I can’t believe there is still snow!

This seemed to be a popular area, as many overnight backpackers were in the area. The thing with weekend backpackers, or section hikers, is that they don’t do a ton of mileage in a day. They have a different agenda than thru hikers. This means that they get to camp rather early to enjoy each other’s company and the views around them. That’s great, but it’s not so great for thru hikers. With minimal campsites, compared to California, after doing a high mileage day and wanting to stop around 730-800 pm, the weekend backpackers had already taken up the campsites. So, I had to find my own. The next marked camp spot was another 12.7 miles away. I was so exhausted and hungry (yes again… always hungry), so I needed to find a spot soon. 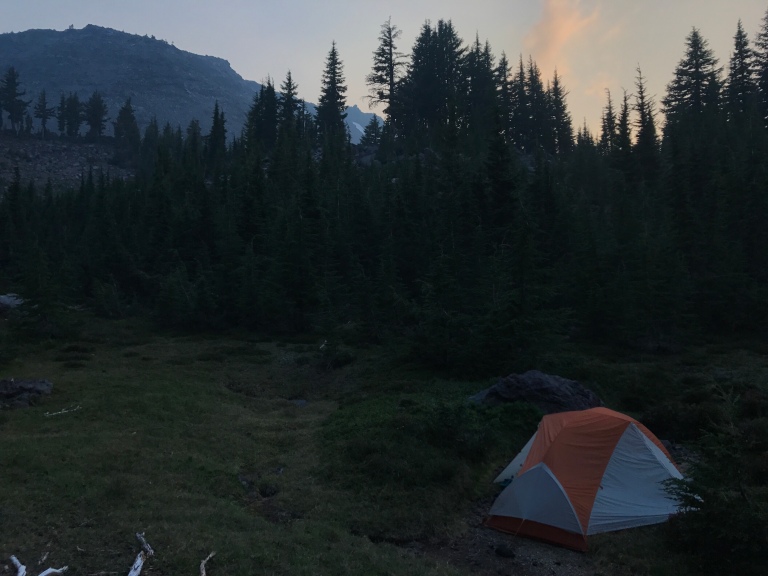 Thankfully, it wasn’t too long before I found a perfect little spot on a sanded area, where a season creek was at one point (I’m guessing), in a green bushy meadow with pink flowers. It was actually quite perfect. I had a ramen bomb (ramen noodles with mashed potatoes), which I had grown quite fond of, and quickly retired to my tent. The mosquitos were trying to eat me alive. It was a pretty cold night. I wished I had long pants to put on, but was able to stay warm snuggled in my sleeping bag liner and sleeping bag, like a caterpillar in her cocoon.

I slept better than I had in over a week, but only until 1 am. I then started to think about the fire closures and having to inevitably skip ahead at some point. I also woke up starving, so I ate an entire bag of Cheetos and Peanut M&Ms. My favorite part of camping alone… not having to worry about waking other people up. The chocolate is probably what prevented me from going back to sleep.

I decided to get up and hike fairly early, since I tossed and turned after my chocolate binge! The sunrise was beautiful, so I didn’t regret my decision.

One Day said something that stuck with me, when conversing with another hiker regarding the fire closures. The other hiker said that there is no alternate and she said if you can drive it, you can walk it. I took this to heart initially. However, after thinking about it all day, and all night, and the following morning, I really had to ask myself why I was out there. I’ve talked with a dozen other hikers on what their fire closure plan was and why. I’m slightly envious of those who answer without any hesitation. Those who know exactly what they want and why they are here. I was dead set on at least attempting the road walk, until I answered my own question of why I initially wanted to do the road walk in the first place. 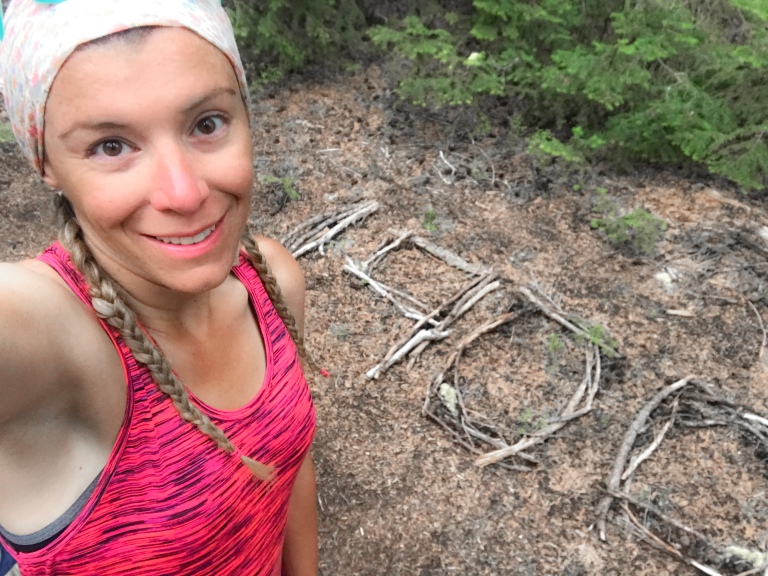 Half way through the day, I really wasn’t feeling well. I started to get nauseas and moving pretty slow. I was a bit worried I might have gotten giardia again, but thank goodness didn’t!

I was surprised by the number of lakes I passed by throughout the day. I kept thinking that this part of the trip should be called Thousand Lakes Wilderness. The lakes weren’t very picturesque. Embedded in the trees, some of which you’d never know where there; murky, sometimes foamy water, in which I would never risk drinking, even if filtered; and surrounded by bugs. There were a few that were a nice surprise, but not many.

I sluggishly made it to Elk Lake Resort, in which those who chose to road walk 90+ miles past the fire closure, would continue, and those who chose not to, would hitch into Bend, rest and figure out how to get around the closure.

I of course, wanted to eat before deciding if I was to hitch that night, or wait for the following day. Two entrees later, I made a sign to hitch hike, and of course included that it was my birthday (well, the following day was).

It wasn’t but a minute later that the most wonderful family picked me up. Kristin, Scott and their 3 boys (Jasper, Fox and Theo) gave me a ride into Bend. After conversing for awhile, and getting closer to Bend, they asked where they should drop me off. I said the closest hotel or hostel. They looked at each other and then, even though never having been trail angels prior to this event, asked me if I wanted to stay the night at their house.

It was an unforgettable birthday. After showering, and doing laundry, the 5 of us sat down and had a movie night with fresh home baked cookies. I looked at how happy they are, what a wonderful family there are, so giving, so loving, so accepting. If I am ever blessed with a family of my own, I can only hope it is as wonderful as this one. 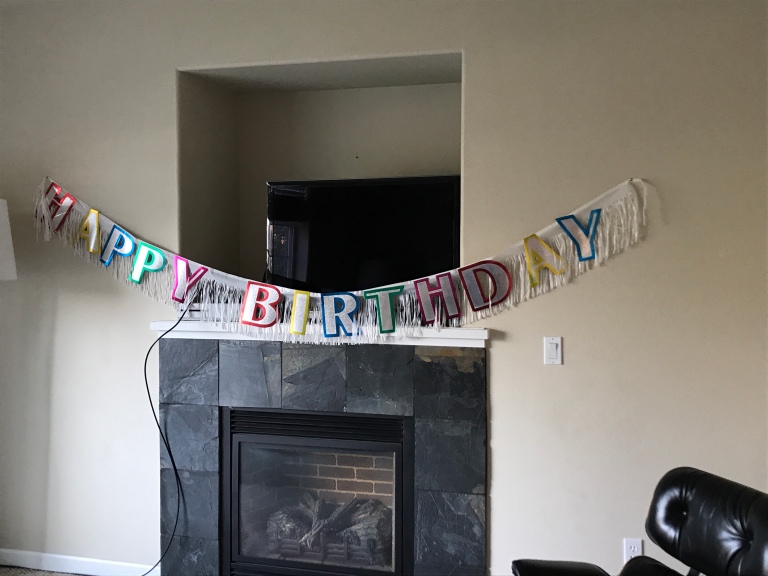 Upon waking up in the morning and making my way downstairs, I was so delighted by the happy birthday banners that Kristin and Scott had put up the night prior. The smell of the amazing blueberry pancakes, oatmeal, and many more appetizing breakfast items, put a smile on my face that spread from cheek to cheek, and would soon satisfy my always hungry stomach. My heart was so happy. I felt so loved by this family who only a few hours prior, were merely strangers.

This is the unconditional love that God wants us all to give. A love for your neighbors, even if they are strangers. This should be inspiration for us all, religious, non-religious and spiritual alike. Love each other. Do good for others. I challenge you all to go out there a make someone’s day; make them feel loved, asking for nothing in return.

You know, life isn’t easy for any of us. We all have our demons, we all have our heartache, stress, bad days, followed by worse days. We all suffer, no matter how great or small… We all suffer. Despite all of life’s sufferings, despite all the bad days, despite my mending heartache, I have never doubted the existence of God. I don’t know why, some people say there can’t be a God with all of the bad things in this world, but that’s not a debate I wish to start. I’ve been dealt my fair share of crap in this life, but I know God exists and I know that He loves me because of people like Kristin, Scott, Theo, Fox, and Jasper.

This wasn’t the only blessing I had on my birthday, the day continued to surprise me, but I will save that until next time… I think this is long enough 🙂

Leave a Reply to Mike aka Iamlonewolf1212 Cancel reply