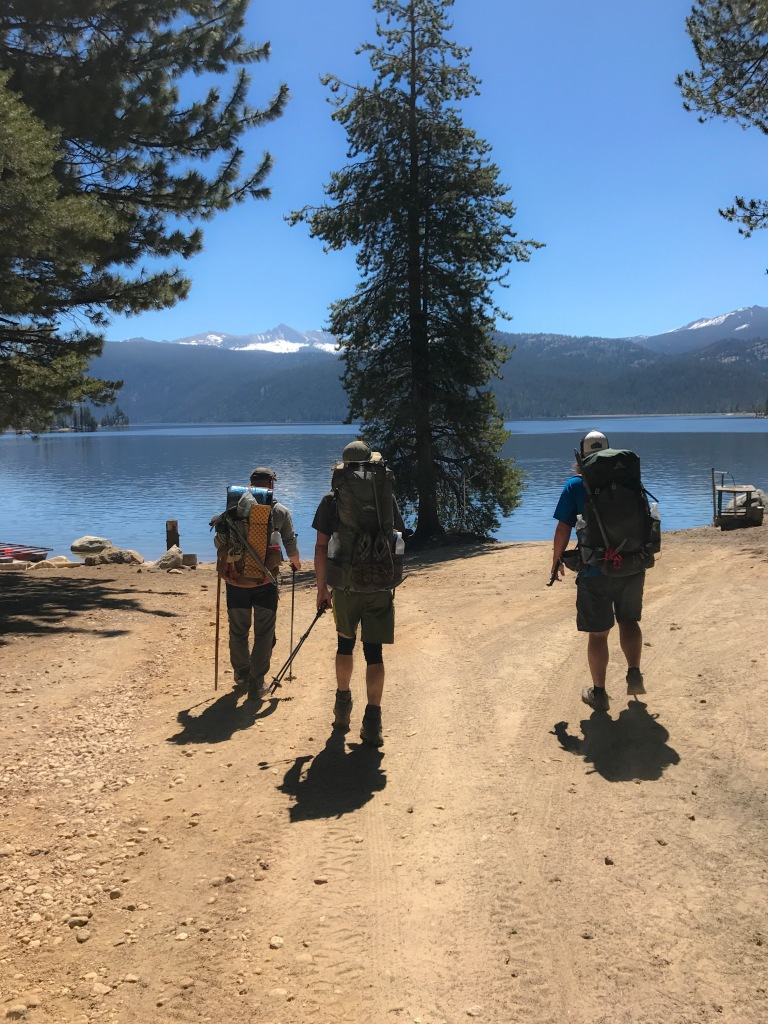 I left VVR in the late morning, after breakfast, by “ferry”, aka small speed boat. I sat at the ferry terminal making some phone calls and trying to get the motivation to start moving.

There were 3 major creek crossings of the day. 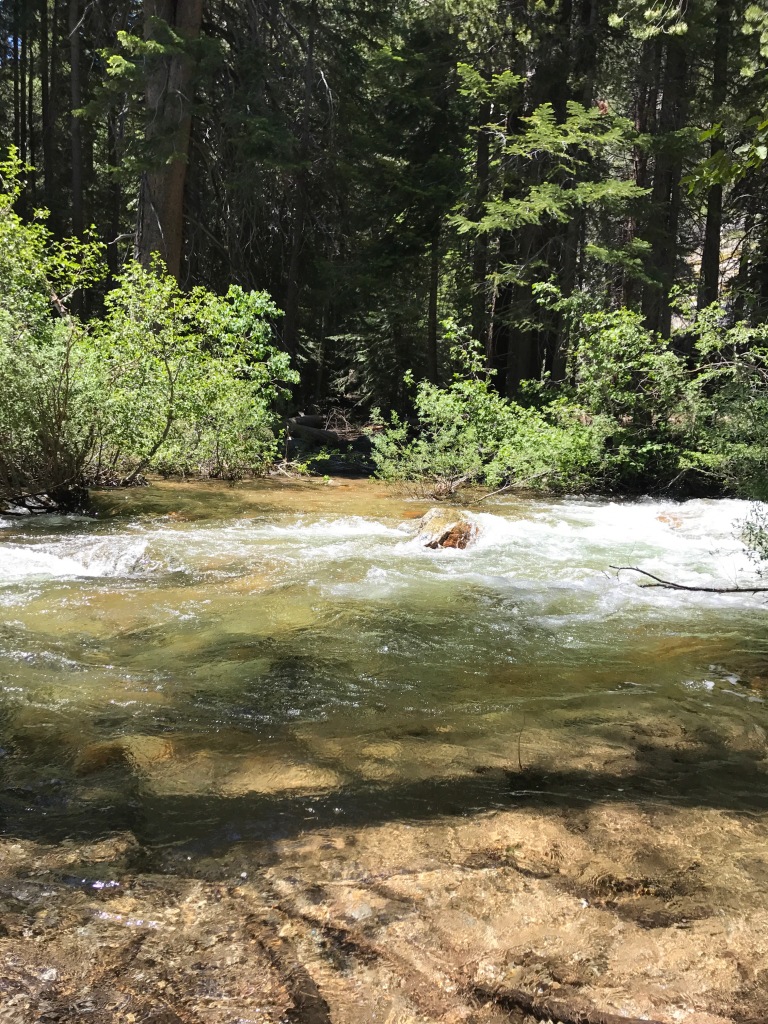 North Fork Creek was waste deep, and I crossed at trail.

Mott Lake Junction I attempted to cross on a log about 100 yards upstream. I lost my balance at the beginning and was lucky enough to jump back to safety. I went up stream a bit, but still back from the trail, and crossed 3 smaller sections of the creek. One was pretty fast moving and thankfully there was a log to stabilize me, while I regained my footing. After crossing this, I decided to take a break, eat dinner and dry out some of my stuff. While eating, I ran into Wizard again and asked him if we could cross the next creek together, as I heard horror stories about it.

Silver Creek is a stream that runs under a waterfall along the trail. Guthooks says that it can be a tricky crossing because the waterfall can “blast hikers with frigid cold water coming off the waterfall”.

It was more like a torrential downpour of ice cold water, blasting your entire body and face. It literally took my breath away. It had a decent current, so I had to make sure to not let the ice cold water hitting me in my face, take away my focus of crossing safely.

The snow took away most of my energy and I didn’t get very far. I camped in a snow pocket around a trees for dry ground. It was a very cold night.

I didn’t get a good night sleep the night prior because I was so cold. I didn’t want to get out of my tent and put on my cold, wet boots on until the sun was actually shining on me.

I finally got moving around 8 am. It was a tough morning, hopping over suncups, trying to following footsteps and navigating up Silver Pass. Maybe I was slower because I didn’t have a group and I knew that I could take my time, but I couldn’t imagine doing a 20 mile day in these conditions. However, I was pretty proud to have done 17 miles that day. I really needed to get my body accustomed to doing high miles again. 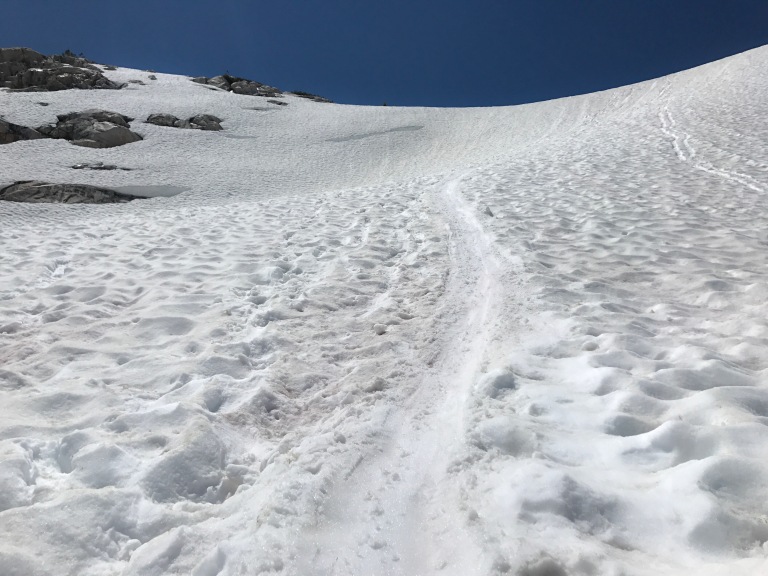 There were a few opportunities for glissading on the way down, so that was fun.

I definitely felt like a hot mess after the High Sierra section!

There weren’t any big water crossings today, which was a nice change of pace. I was aiming for 20 miles, but I got a bit lost from the trail, so that set me back a bit. I finally gave in and set up my tent at 830 pm. I was a bit worried about being in bear country, alone, in the midst of the trees, but my body was too tired to care too much about bears. I quickly fell asleep, despite the aches and pains.

I was ecstatic to have had a 20 mile day in the High Sierra!! I was still capable!

I woke up and excitedly crossed the 900 mile marker! Woohoo!! 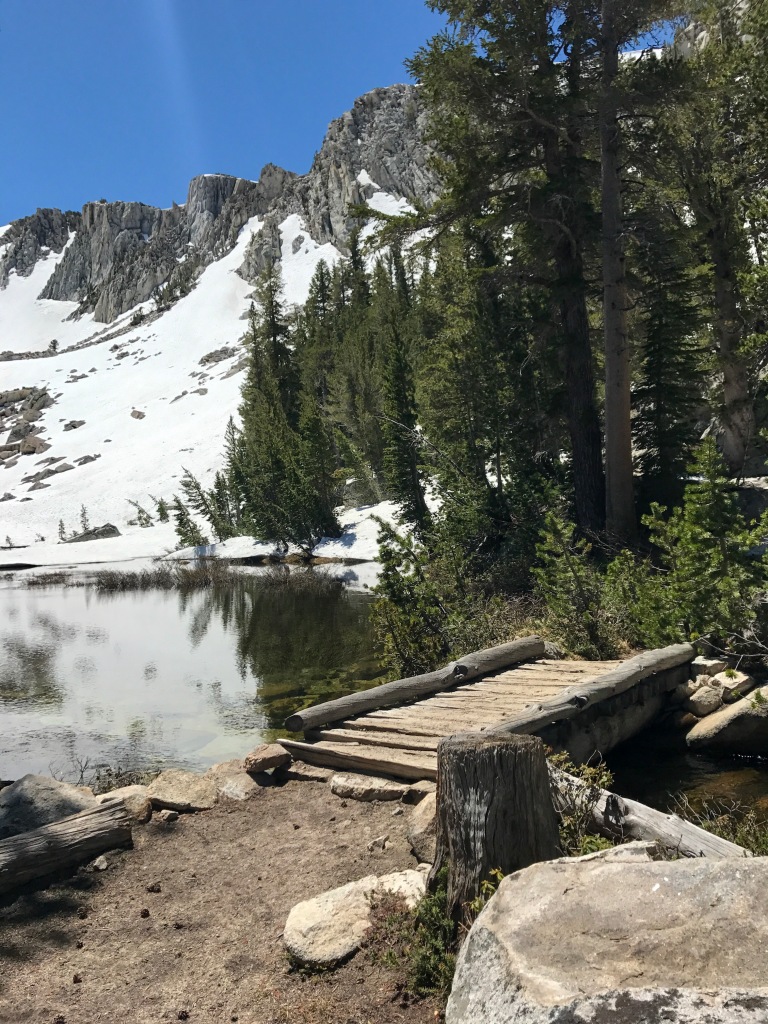 Most of the day was snow free which was awesome. Although, there were a billion fallen tree obstacles to either go around, climb over, or crawl under.

There were still snowy areas, but they weren’t terrible.

The only sketchy water crossing was Minaret Creek. It wasn’t even that sketchy, it was just deep.

The afternoon was filled with beautiful panoramic mountain views, wildflowers and alpine lakes.

I was determined to get to Tuolumne Meadows by the end of the day. I knew 22.6 miles would be pushing it, but I was ready for a nice cold soda.

Island Pass had significantly less snow than the other passes I had conquered, especially coming down from the pass.

The pass was named because of the lakes surrounding it, which were still frozen, because yes, there still were snowy areas, of course.

Donahue Pass was an entirely different beast. Guthooks states, “Another dramatic pass… in a heavy snow year, it might be a long slog to get to the top”.

That it was; a long slog to get to the top of Donahue Pass. However, being more confident in the snow and having a sudden burst of energy, I found it to be one of the easier passes.

I was told to follow the PCT on the way down and ignore all the footprints.

Well, I am pretty sure I was the only person to follow the PCT. It was almost as steep as Glen Pass on the way down, except not as scary because I wasn’t scared anymore.

I enjoyed this pass because of this reason; I wasn’t scared, I was having fun! 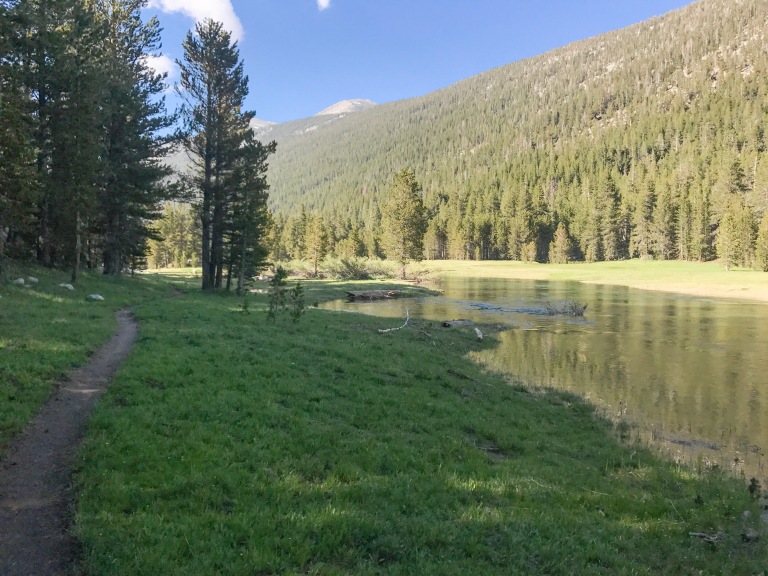 After a long day, traveling over two passes and lots of small creeks, I finally made it to Tuolumne Meadows. 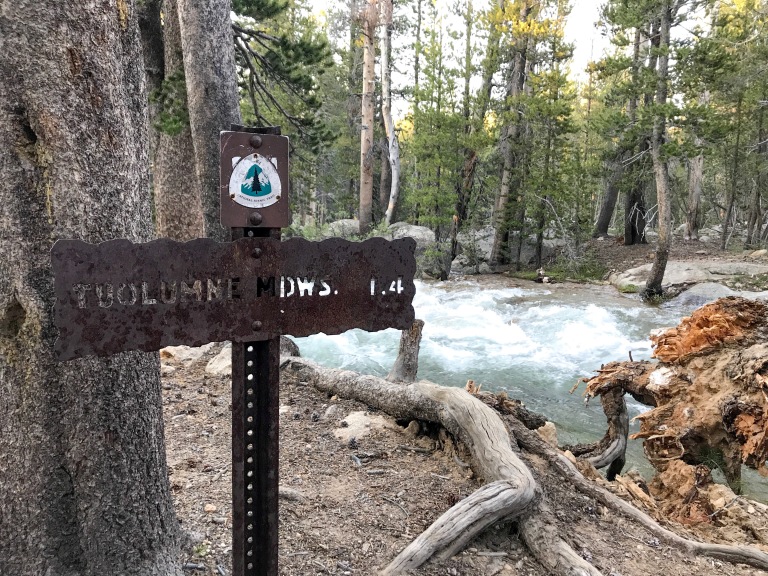 Unfortunately, the Tuolumne Meadows post office and campground were closed still because of the weather conditions this year, so all PCT packages got forwarded to Yosemite Valley. Yosemite Valley is at least 40 minutes away from Tuolumne Meadows, so I could either hitch, or get the bus that runs once a day to the valley.

I know some of you have been asking what my trail name is, so I won’t make you wait another week.

I am now Bumblebee. As for the reason why I was named Bumblebee, that will have to wait until the next post! Sorry!